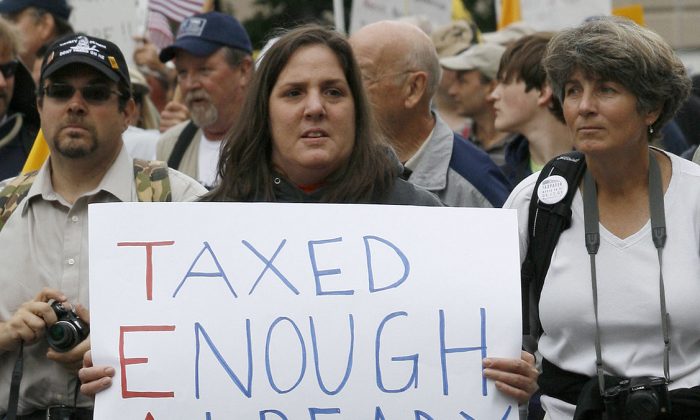 A woman holding a tea party sign at a taxpayer march in Washington on Sept. 16, 2009. (Creative Commons)
Economy

On account of primitive and often misleading accounting, states continue to expand liabilities without the awareness of taxpayers.

A thorough 136-page report released by Truth in Accounting (TIA) on Sept. 24 seeks to cut through the jargon of financial reports. The nonprofit found the combined taxpayer burden of “unfunded state debt” to be $1.5 trillion for the 2017 financial year, up $53.4 billion from 2016.

TIA offers state profiles via its State Data Lab, although only 10 states have met their debts and attained surpluses in the 2017 fiscal year. In the worst 10 states, each taxpayer owes, on average, over $20,000 to meet balanced-budget requirements. New Jersey is by far the worst culprit, with a per-taxpayer burden of $61,400, followed by Connecticut at $53,400, Illinois at $50,800, Kentucky at $39,200, and Massachusetts at $33,500—all “sinkhole states,” as described by the report.

This is the ninth edition of the annual Financial State of the States, and it does give positive marks to some states. Alaska stands out, since the surplus is $56,500 per taxpayer. Alaska has over $15 billion in spendable assets, and is one of the five “sunshine states,” along with North Dakota, Wyoming, Utah, and South Dakota. These states are the best performers with enough money to cover all budget liabilities.

Sneaking Under the Radar

TIA research director Bill Bergman shared with The Epoch Times that “states in general do not have enough money to pay all of their bills.” They have “accumulated massive debts off their balance sheets.” He points the finger at “budgeting practices based largely on cash (as opposed to accrual) accounting principles.”

The pay-as-you-go approach fails to account for commitments to be paid in the future. The elephant in the room, according to TIA, is the rising and ominous cost of pensions and retiree medical-care for state employees. A combination of the Great Recession and baby boomer retirement has exacerbated the fiscal shortfalls and IOU blind spots of the states, akin to the Social Security dilemma at the federal level.

Bergman wants expenses reported “when incurred, not when they are paid.” He contends that a lack of awareness means politicians can campaign on misleading numbers: “Unfunded retiree pension and health-care benefits [grew] significantly since 2009, despite the economic and financial market recoveries since then.” He hopes that this report will give citizens and taxpayers the tools to hold officials accountable.

Every year, the TIA report estimates the tax surplus or tax burden of each state. In addition to finding 40 states in the red, the authors contend that individual reports reveal mismanagement.

Bergman explains that “all states are not alike, and some states have actually done very well, in terms of walking the talk on balanced budget requirements advertised to their citizens.” To better illustrate individual financial performance, the organization has, for the first time, given a letter grade to each state.

The states that have not balanced their budgets and have taxpayer burdens exceeding $20,000 get an F—10 states this year.

With this grading system, Bergman contends citizens have an easily accessible tool “to be responsible and informed.” He also wants this to be a fair metric for comparison across states.

Having a surplus in spendable assets does not, however, equate to having the best accounting system or timely reporting. While companies take an average of 45 days to issue their financial reports when each fiscal year is over, state governments take more than double that.

Michigan got a D grade and needs $53 billion to pay its debts, but it was the only state to publish its financial report within 100 days, the time suggested by TIA. Alaska took 224 days from the end of the fiscal year, just 48 days fewer than New Jersey.

Both states failed to meet even the 180-day term suggested by the Government Finance Officers Association. In fact, 22 states went over that recommendation, and Alabama’s data was not published when the TIA researchers compiled their report.

TIA identifies new financial-reporting rules from the Governmental Accounting Standards Board that will take effect in the 2018 fiscal year and bring “hidden debt” out of the shadows. However, rules 74 and 75, which apply to post-employment benefits, allow states to take the figures from the previous year, a delay that TIA rejects and describes it as ripe for misuse.

TIA identifies as nonpartisan, and “makes no policy recommendations beyond improvements to budgeting and accounting practices.” Within that scope, though, the organization advocates “Full Accrual Calculations and Techniques” or “FACT-based budgeting.” That includes the most recent pension data, timely releases available online, and audits by certified public accountants.

Their message to politicians is to simply “stop claiming to balance the budget while putting off expenses into the future, placing a larger debt onto incoming generations.”

One scholar who does take a stand on state fiscal reform is Eileen Norcross of the Mercatus Center at George Mason University in Virginia. For many years, she has pointed out not only the lack of reporting but misleading discount rates that devalue future payments. Norcross says this could be avoided with defined contributions, rather than defined benefits for state employees.