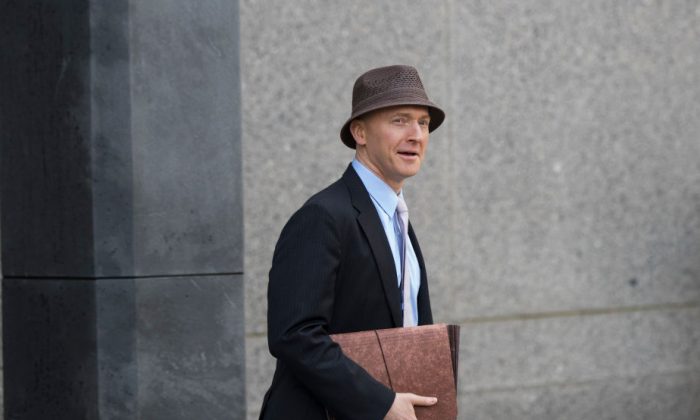 Newly declassified documents released on July 21 substantiate long-held suspicions that a group of top Obama administration officials used an unverified opposition research dossier, funded by Hillary Clinton’s presidential campaign and the Democratic National Committee (DNC), to obtain a warrant to spy on former Trump campaign volunteer Carter Page, yet failed to inform the court about who funded the dossier.

Then-FBI Director James Comey and then-Deputy Attorney General Sally Yates signed off on the initial warrant application to the Foreign Intelligence Surveillance Court (FISC), according to the trove of documents released by the Justice Department. Despite telling the Senate intelligence committee that he knew in January last year that the dossier was “salacious and unverified,” Comey signed off on two renewal warrant applications. The 400 pages of the secret court documents span the initial warrant application and three renewals, none of which disclose to the judge that the evidence presented was paid for by the Clinton campaign and the DNC.

The FBI renewed the initial warrant to surveil Page three times, with Comey and Yates signing the initial renewals, followed by approvals by then-Acting Attorney General Dana Boente, then-FBI Deputy Director Andrew McCabe, and Deputy Attorney General Rod Rosenstein. Despite a year of surveillance, no charges were ever brought against Page. The release of the documents also suggests that Page is unlikely to be the subject of any investigation.

In the nearly 40-year history of the FISC prior to July 21, the Justice Department never released warrant applications to the public. The raw-document revelation is the first major piece of evidence backing claims that the Trump campaign was subjected to politicized surveillance.

The FISC documents are notably thin on evidence, with claims from the Clinton-funded dossier making up the core of the claims against Page. Christopher Steele, a former British spy, used second-hand sources to compile the dossier, the documents show. Steele was hired by Fusion GPS at the behest of Perkins Coie, a law firm working for Clinton and the DNC.

The Obama officials topped off the claims from Steele’s dossier with nearly eight pages of claims gathered from media articles. Each of the media reports used a negative angle on the Trump campaign.

In one instance, the FBI officials cite “speculation in U.S. media” as proof that the Russian government is behind the hack of the DNC’s servers.

In another instance, the warrant describes an article which speculates that Trump would not give weapons to Ukraine if he were elected president. Last year, Trump approved the sale of Javelin tank-busting missiles to Ukraine.

In a third instance, the officials cite an article reporting that Page is under investigation. The officials name a “Western intelligence source” as one of the sources in the article, but, knowingly or not, fail to disclose that the source for the article was Steele.

In intelligence circles, using such evidence is called circular reporting: an act of citing the same evidence through multiple sources to create an appearance of corroboration. In another instance of this tactic, the warrant application cites a letter from Sen. Harry Reid (D-Nevada) to then-FBI Director James Comey. Reid obtained the allegations in the letter from then-CIA Director John Brennan, who in turn learned of the claims from the Clinton-funded dossier.

The FISA documents also reveal, for the first time, that the FBI paid Steele for his services. It was known that the bureau planned to pay Steele $50,000, but cut ties with him because Steele started speaking to the media in violation of the FBI’s source policies. The new documents confirm that Steele received the money despite breaking the rules.

Steele hired “sub-sources” to conduct the research for his dossier, the documents show. But instead of verifying the credibility of those sources, the FBI officials used the claims in the dossier based on the assessment that Steele was a reliable source. The assistant director of counterintelligence division at the FBI, Bill Priestap, admitted under oath in Congress that verification of the Clinton-funded dossier was in its infancy during the first FISA application, according to a memo (pdf) by the House intelligence committee.

President Donald Trump suggested on July 22 that the FISA documents substantiate allegations that the Trump campaign was the target of politicized spying to benefit his opponent in the 2016 election.

“Looking more & more like the Trump Campaign for President was illegally being spied upon (surveillance) for the political gain of Crooked Hillary Clinton and the DNC,” Trump wrote on Twitter on July 22. “Republicans must get tough now. An illegal Scam!”

Looking more & more like the Trump Campaign for President was illegally being spied upon (surveillance) for the political gain of Crooked Hillary Clinton and the DNC. Ask her how that worked out – she did better with Crazy Bernie. Republicans must get tough now. An illegal Scam!

The FISA documents show how spying on Page could open the door to spying on the entire Trump campaign. In the initial application, the FBI officials state that “these same authorities may also incidentally require other foreign intelligence information, as defined by the Act.”

The admission suggests that the FBI team received approval to collect surveillance on individuals connected to Page. For example, if the FBI surveilled Page electronically, which is almost certain given a nearly five-page, fully redacted list of “specific authorities requested,” the agents could pull from the National Security Agency’s communications database using the “two-hop” rule.

Trump indicated he is aware of the possibility as part of another Twitter message on July 22 quoting Fox News anchor Pete Hegseth.

“Carter Page was just the foot to surveil the Trump campaign,” Trump wrote.

Page vehemently denied the allegations in the documents during an appearance on CNN on July 22.

“This is so ridiculous, it’s just beyond words,” Page told “State of the Union.”

“I’ve never been an agent of a foreign power by any stretch of the imagination. It’s really spin.”

Eleven congressmen accused Comey, McCabe, Yates, and Boente of depriving Page of his rights and of investigative misconduct in a criminal referral sent on April 18 to Attorney General Jeff Sessions and FBI Director Christopher Wray.

Trump fired Yates for insubordination last January and removed Comey last May for usurping the attorney general, among other missteps. Sessions fired McCabe for authorizing a self-serving leak to the media and lying about it to investigators. Boente is now the FBI’s general counsel.