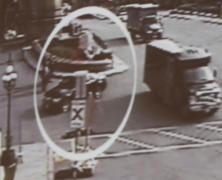 Last fall, tourists to the north rim of the Grand Canyon reported seeing a gray wolf (Canis lupus). The only problem was there had been no wolves in the area for over 70 years. Still, it turned out the animal in question was not a coyote or stray dog, but, indeed a female gray wolf known as “914F”. She had migrated hundreds of miles from the northern Rockies. Unfortunately, this was near the end of her story.

On December 28th, 914F was shot dead by a hunter in Utah, who claimed he mistook her for a coyote. This despite the fact that the news of the wolf in the Grand Canyon area was deliberately leaked by the Center for Biological Diversity in a bid to make sure hunters would not mistake her for a coyote.

Three weeks before her death, school children had held a contest to rename 914F, “Echo.”

“Echo came to a heartbreaking end, but her odyssey through forest and desert shows that excellent habitat still remains for wolves in the American West,” said Michael Robinson with the Center for Biological Diversity. “Her death also demonstrates that public education, law enforcement and solid science are needed now more than ever to recover endangered wolves, and that the last thing they need is to have their federal protections yanked.”

After coming close to extinction across the lower-48, gray wolves—who persisted just in northern Minnesota—came back in the late 20 Century due to migrations south from Canada and reintroduction efforts. Their return would not have been possible without protection from the Endangered Species Act (ESA), yet it soon lit off a political firestorm.

The gray wolf was removed from the ESA in certain states due to a legislative rider in 2011—the only animal to ever lose ESA protection in such a way. Since then thousands of wolves have been killed by hunters and trappers, even as they have dispersed as far as Michigan to the east and California to the west. Recently, a judge ordered the Great Lakes population (Minnesota, Wisconsin, and Michigan) back under protection, but those in the West continue to face hunting and trapping seasons, depending on the state. Meanwhile, the Obama Administration is considering removing all gray wolves from the ESA for all 48 states.