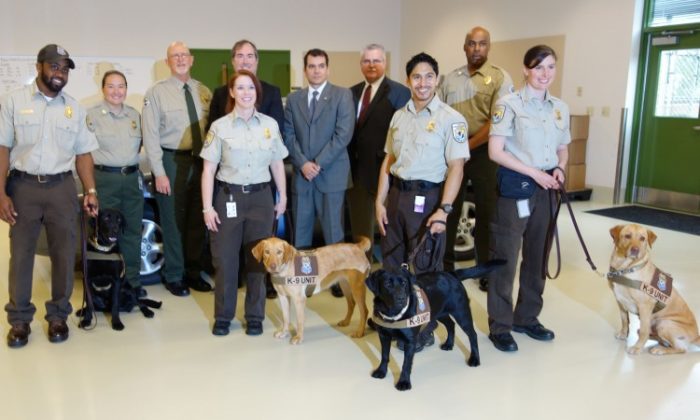 NEWNAN, Ga.—Black Lab Locket “the Rocket” trotted on a moving conveyer belt, sniffing and leaping over box after box, wagging her tail. She scrabbled at one box with both front paws, looking up at her partner, Wildlife Inspector-Handler Raymond Hernandez.

That box held wildlife contraband. Hernandez praised Locket and gave her a treat. The pair had just completed a thirteen-week intensive certification course at the U.S. Department of Agriculture National Detector Dog Training Center. They and their classmates demonstrated their skills at the center, after a graduation ceremony.

Locket and Hernandez and their fellow graduates will go to ports around the country to stop black market deliveries of rhino horn, snake skins, ivory, sea turtles, sea horses and more.

“We are the second largest consumer of wildlife in the world (after China) and we owe it to them to do something,” said Fish and Wildlife Service Office of Law Enforcement Deputy Chief Ed Grace. He traveled from Washington to honor the graduates.

“The recent rapid growth in the global trade in protected wildlife is pushing some species perilously close to extinction. Elephant and rhino populations in particular are declining at alarming rates,” Grace said, quoted in a FWS press release. The FWS is responsible for enforcing the Convention on the International Trade in Endangered Species of Wild Fauna and Flora.

Using dogs is a “force multiplier,” according to NDDTC Training Specialist James Mason, who taught the handlers. He told the graduates to keep up with their training, continually practicing and learning. “Do your best. We need this to succeed not just for our department but for the world’s wildlife.” It’s a pilot program and will be carefully watched to make sure it works.

The dogs can do in minutes what would take a person all day, according to Inspector Denise Larison. Butter, her canine partner, found the contraband in a four-foot tall, three-foot square stack of small boxes in less than five minutes. Larison would have needed to open and inspect every box. She walked Butter around the stack until Butter sat, wearing an excited expression. “Show me,” said Larison. Butter nosed at the guilty box and pawed it out of the stack.

The dogs learn what to detect using seized wildlife products. Larison showed a rhino horn, while Inspector Amir Lawal opened a large Ziploc bag of dried python skins, which he said even a human can identify. The skins smell acrid.

The group came from four sources: a breed rescue organization, a private breeder, a Humane Society shelter, and governmental animal control. In each case, knowledgeable volunteers were looking for dogs with the right temperament and talents to do the job: Outgoing, eager, not aggressive, and strongly motivated by food.

The dogs and handlers will mainly work in Los Angeles, Miami, Chicago, and at a UPS facility in Louisville, Kentucky. Those cities are wildlife importation and smuggling hubs, according to the NWS. The goal is to deter poaching by effectively enforcing the law. “Illegal wildlife trade is one of the main reasons that many species are endangered,” second only to habitat destruction, according to the World Wildlife Federation.

The dogs will “help us save the world’s wildlife one sniff at a time,” said Mason.