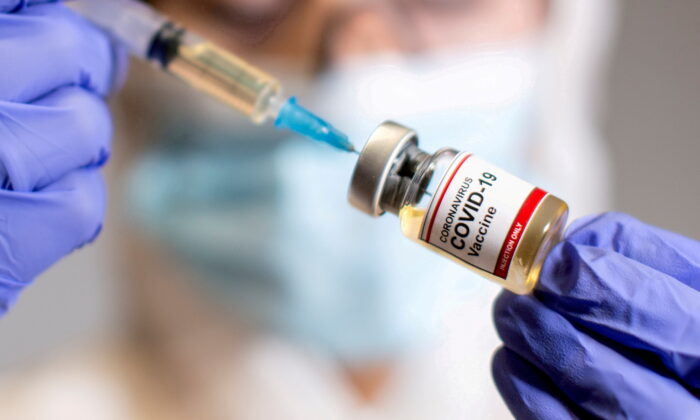 A woman holds a small bottle labelled with a "Coronavirus COVID-19 Vaccine" and a medical syringe in this illustration taken Oct. 30, 2020. (Dado Ruvic/Reuters)
Viewpoints

More than a year after 48-year-old rock singer Zion died after receiving an AstraZeneca jab, his fiancé, Vikki Spit, became the first person in the UK to receive compensation for a COVID-19 vaccine death.

Zion started to get headaches eight days after getting the injection, and these became so severe that a few days later he suffered a seizure and was admitted to hospital. He died after undergoing surgery just two weeks after being vaccinated.

The amount Spit received was around $147,000, which is the maximum compensation level set under the Vaccine Damage Payment Scheme of 1979. But, as that was established 43 years ago, she feels this is an inadequate amount.

Before the pharmaceutical giants would release their experimental COVID-19 vaccines in the UK, they demanded immunity from claims due to death or injury caused by their product.

This was a new development in the UK, and I covered it here for The Epoch Times.

Just one week later—on Dec. 31, 2020—the UK government granted legal indemnity to the vaccine manufacturers and to the NHS staff administering the injections to prevent them from being sued.

Damage or death caused by the coronavirus vaccines would be covered by the Vaccine Damage Payment Act. Zion’s fiancé is the first and, so far, only beneficiary of that fund.

The Clinical Negligence Blog wrote at the time that by offering no-fault compensation the government would limit the pay-out to a fraction of what a civil court might award. It would also reduce the likelihood of adverse publicity that could spook the public and hamper the mass vaccination program.

Was that also the reason the payment for Zion was delayed until now?

The UK was hailed for its speedy rollout of the vaccines, with 15 million doses administered in the first 10 weeks alone. The now disgraced health secretary, Matt Hancock, told the BBC, “The vaccine is our route to freedom—we will beat this virus jab by jab.”

The fact that drug companies required immunity from prosecution before releasing the vaccines should have sounded alarm bells about their safety.

In the previous summer, Bill Gates had pressured politicians in Britain and the EU to grant immunity to the COVID-19 vaccine manufacturers.

He believed the severity of the situation justified taking big risks. He said, “Governments will have to decide, you know, do they indemnify the companies and really say let’s go out with this, when we just don’t have the time to do what we normally do.”

His wish was granted, and the Johnson government allowed big pharma to carry out clinical trials on the UK population, with impunity.

Office for National Statistics (ONS) figures up to May 2022 for death-by-COVID-19-vaccine show 43 deaths in England where the vaccination is mentioned on the death certificate, of which 37 deaths are where the vaccine was believed to be the underlying cause.

That’s 43 deaths from a jab that was presented as safe. Although, perhaps it was safe if you’re Welsh as, surprisingly, the ONS chart lists no COVID-19 vaccine deaths at all in Wales.

The UK government’s Yellow Card reporting scheme—similar to VAERS in the United States—reported a much higher figure of 2,182 deaths up to June 8, 2022, potentially caused by the vaccines.

The actual number of fatalities and injuries may well be higher, even exponentially so, but if the doctor is not willing to connect the deaths or injury with the COVID-19 vaccine, no compensation is due.

The ONS states: “The medical professional certifying the death must have believed, to the best of their knowledge, that the vaccine was part of the events that led to the death.” But, as it is likely the doctor was the one who recommended the vaccine’s use to the now deceased, then it may be in their interest not to make the connection.

Conspiracy aside, it is of course very difficult to link cause and effect, especially as the time between having the jab and dying increases.

Vikki Spit only received her award because of the short time interval, and because her fiancé’s doctor was willing to state Zion died due to complications from the vaccine.

The UK government clearly has a vested interest in making it difficult to prove the vaccines were the cause of death. Either to reduce the financial burden of compensation on a mass scale, or to limit the political fall-out of having promoted their usage—even mandating care home workers to get jabbed or lose their jobs.

The U.S. government faces an even greater potential burden, and not just because of the increased population size but because of the widespread use of government mandates for the not-fully-tested vaccines in the military, aviation, and other sectors—indeed, at one point, any private sector company with more than 100 workers.

Did anyone stop to consider that forcing the armed services to take a potentially dodgy drug was a potential threat to national security?

Such was the tsunami of fear that the virus evoked, presidents, monarchs, politicians, and generals all rushed to get jabbed with vaccines that should never have been allowed out of the labs before completing their full tests and trials.

If there really was a vaccine in the syringes they went on camera to be jabbed with, that too had national security implications that should have been considered.

More alarm bells should have sounded from the moment the phrase “warp speed” was used to explain how vaccines could be developed so fast. Everyone knew the original concept was a work of fantasy fiction, and so were these fully tested assurances.

At the end of December 2020, the BBC online news used a flowchart to explain how the correct procedures had been followed in developing the vaccine, in record time, so there was nothing for people to worry about. It showed how the clinical trials and regulatory reviews could be condensed into two years instead of ten.

I wrote to the journalist who compiled the piece to ask her how these tests can have been carried out over a two-year period, when the virus had only been discovered a year earlier. She didn’t reply to me, but soon after a revised version of her chart appeared showing everything condensed into less than one year.

The first chart was either poorly researched, or the UK government-funded news agency was telling a mighty big porky, or it was revealing that the COVID-19 vaccine development had begun at least a year before the Chinese authorities told the world about it.

Although the amended chart fits the accepted timeline better, it should have scared the bejabbers out of everyone to see just how experimental everything about these vaccines was.

Yet still, around 75 percent of the UK population believed government and media assurances that the jabs would be safe and are now fully vaccinated.

A singer called Zion was one of them.