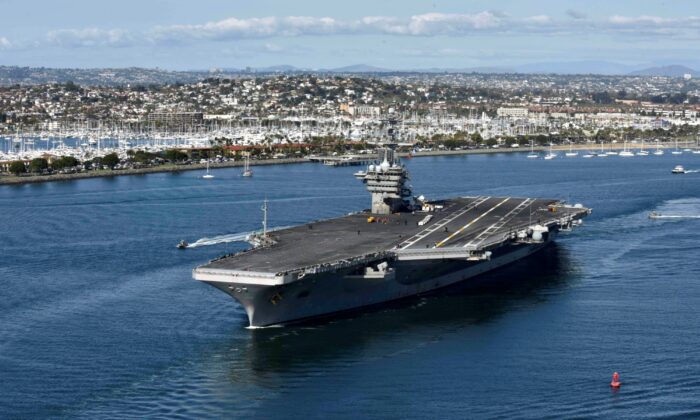 The Nimitz-class aircraft carrier the USS Carl Vinson, which departed San Diego last month, will conduct flight operations with fixed and rotary-wing aircraft, maritime strike exercises, as well as coordinated tactical training between surface and air units in the disputed region, the Navy said in a press release.

The operations in the South China Sea are part of the U.S. Navy’s routine presence in the Indo-Pacific, officials said, noting that the strike group is deployed to the U.S. 7th Fleet area of operations “in support of a free and open Indo-Pacific region.”

“The freedom of all nations to navigate in international waters is important, and especially vital in the South China Sea, where nearly a third of global maritime trade transits each year,” said Rear Adm. Dan Martin, commander of the Carl Vinson Carrier Strike Group, in a statement. “It is in all of our interest that the international community plays an active role in preserving the rules-based international order.”

“The United States will continue to fly, sail, and operate wherever international law allows, as USS Benfold did here,” the U.S. 7th Fleet said in a statement. “Nothing [the People’s Republic of China] says otherwise will deter us.”

China has tried to forcibly deny other countries in the region from accessing the rich fishing grounds in the disputed sea. Brunei, Malaysia, the Philippines, Taiwan, and Vietnam all face territorial disputes with China in the South China Sea.

In July last year, more than a dozen on board a Vietnamese fishing boat were forced to jump overboard after their ship was rammed by a Chinese vessel. In January, a Filipino fisherman said he was blocked by the Chinese Coast Guard from sailing to a fishing area near an island administered by Manila.

In March, more than 200 Chinese vessels—believed to be crewed by Beijing’s maritime militia—moored at Whitsun Reef, one of the disputed reefs, islands, and atolls in the South China Sea.

U.S. Vice President Kamala Harris, during a press conference in Vietnam on Aug. 26, repeated her criticism of Beijing for undermining the rules-based international order.

“We need to find ways to pressure and raise the pressure, frankly, on Beijing to abide by the United Nations Convention on the Law of the Sea and to challenge its bullying and excessive maritime claims,” Harris said, adding that the United States would “maintain a strong presence in the South China Sea” to confront China.