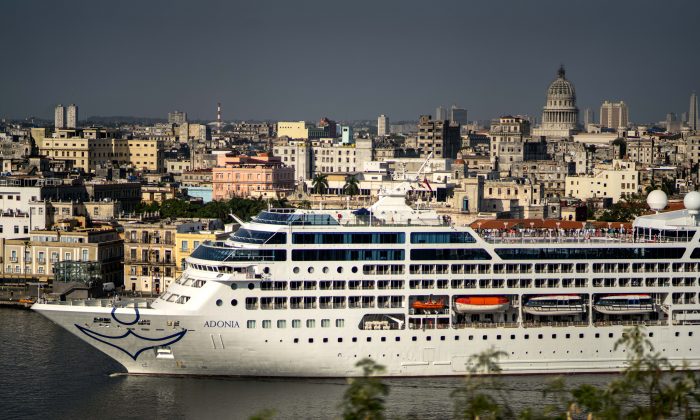 Carnival's Adonia cruise ship arrives from Miami in Havana, Cuba, Monday, May 2, 2016. The Adonia's arrival is the first step toward a future in which thousands of ships a year could cross the Florida Straits, long closed to most U.S.-Cuba traffic due to tensions that once brought the world to the brink of nuclear war. (AP Photo/Ramon Espinosa)
International

First US Cruise Ship Docks in Havana, Cuba, After Decades of Tense Relations

The first United States cruise ship to travel to Cuba in almost 40 years docked on May 2 in Havana, restarting commercial sea travel between the U.S. and the island nation.

Carnival’s cruise “Adonia” left the port of Miami on May 1 carrying 700 passengers.

Although the distance from Miami to Havana is a short 90-mile trajectory, the trip is a big step among relations between the U.S. and Cuba. The countries have had a tense relationship for decades. The U.S. cut diplomatic ties with the communist country and Cold War enemy in 1961.

That seemed to change when President Obama and Cuban President Raul Castro announced opening up diplomatic relations with the island in December 2014.

However, not all diplomatic restrictions will be cleared until Congress ends the embargo.

Nonetheless, the cruise docking into a Cuban harbor is a significant step forward  in reinstating relations, which seemed impossible a few years ago.

In 2005, then-President Fidel Castro made harsh comments about cruise ship tourism calling them: “floating hotels, floating restaurants, floating theaters, floating diversions” that “visit countries to leave their trash, their empty cans and papers for a few miserable cents,” according to the Havana Times.

The “Adonia” carries some Cuban-born passengers, although at first it was prohibited for people born in the island to purchase tickets for the trip.

The Fathom cruise ship company is the first to be granted approval for round trips between the U.S. and various locations in Cuba.

The weeklong voyage will make stops at Havana, Cienfuegos, and Santiago de Cuba for a price of $ 2,662 excluding taxes, fees, and port expenses.

“We made history in March, and we are a part of making history again today,” Arnold Donald, CEO of Carnival Corporation, said in a statement when the travel company announced it would sail as planned from the Miami to Cuba.

“More importantly, we are contributing to a positive future. This is a positive outcome and we are extremely pleased. We want to extend our sincere appreciation to Cuba and to our team who worked so hard to help make this happen,” he added.

Meanwhile, people in Cuba and on the cruise uploaded their pictures of the historic trip on social media:

“We’re going to sail directly from the United States to Havana, Cuba,” the ship’s captain, David Box, said over the ship’s PA system before it docked, according to the Sun Sentinel.

“How awesome is that? Tomorrow we will make history.”