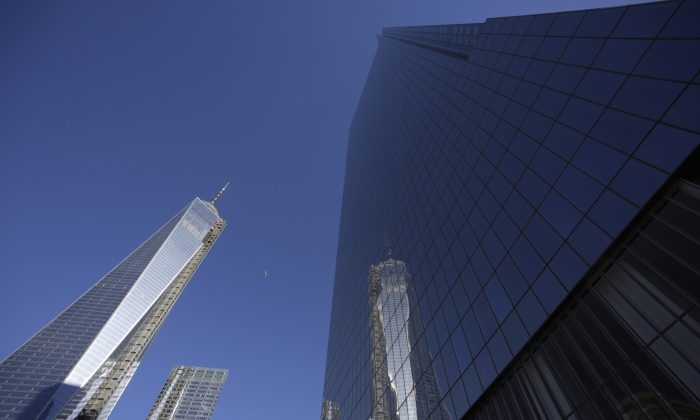 NEW YORK—Twelve years after the 9/11 attacks, the first tower on the original World Trade Center site opened Wednesday with just over half the tower’s office space leased.

Long before the rebuilding began, renting all of the available office space to make the investments viable had been a concern. Four towers will eventually be built, offering millions of square feet of new Lower Manhattan office space.

Two large government tenants will share 29 floors of office space in 4 World Trade Center, which has 72 floors, 56 of which are reserved for office space. The bottom five floors will be retail.

Twenty-seven floors, totaling 1.1 million square feet, are yet to be rented.

Although the tower is open, tenants won’t be moving in just yet. The building is only open for tenants to configure their offices.

The Port Authority of New York and New Jersey, which helped anchor the building with a promise in 2006 to lease 15 floors, doesn’t anticipate moving in until 2015.

The Port Authority signed its lease in 2008, and will occupy floors 15 through 29, starting in 2015. The agency will return its headquarters to the trade center site, where it was located before the original towers collapsed.

The city’s Human Resources Administration will move into floors 30 through 43, also at the beginning of 2015.

Developer Larry Silverstein, president and CEO of Silverstein Properties Inc., was joined Wednesday by Mayor Michael Bloomberg and other officials at a ribbon-cutting ceremony in front of the 977-foot building. Silverstein took over management of four World Trade Center towers in 2001, just months before the 9/11 attacks.

Talking about the time construction workers have put into rebuilding, Silverstein said, “This is truly a project by and for New Yorkers.”

He added he hopes it lives up to the expectations of the city’s residents.

Bloomberg, who assumed office in January following the tragedy, said the building is once again becoming an integral part of the downtown community.

“It took years of hard work and cooperation to make it possible, and this remarkable building is a real credit to those efforts,” Bloomberg said.