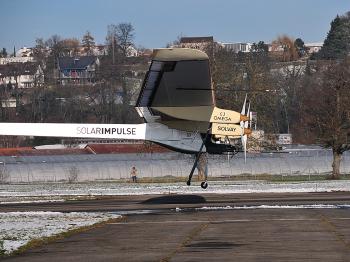 The Solar Impulse, the world's first solar-powered airplane, gets airborne on its maiden flight. (solarimpulse.com)
News

The organization responsible for this short, but completely sun-powered journey is The Solar Impulse Project. Their goal is to make solar energy powered planes a reality.

“For over 10 years now, I have dreamt of a solar aircraft capable of flying day and night without fuel. Today, our plane took off and was airborne for the first time,” said Bertrand Piccard, founder of Solar Impulse, in a statement.

Markus Scherdel, the pilot for this landmark event, explained that the flight on Dec. 5 was merely a test run—an opportunity to get a feel for the new plane.

This round-the-world flight plan makes allowances for 5 short stops to change fatigued pilots, since it would be physically impossible for one individual to make the journey without sleep for more than 5 days.

“The airplane could do it theoretically non-stop, but not the pilot,” said Mr Piccard. “We should fly at roughly 20-25 knots and that would make it between 20 to 25 days to go around the world, which is too much for a pilot who has to steer the plane. We believe the maximum for one pilot is five days,” he added.

But of course the point of this epic flight isn’t to test pilot endurance. Piccard hopes that it will send the world a message about just how powerful and useful renewable energies could be.

“The real success for Solar Impulse would be to have enough people following the project and become enthusiastic about it. We want to hear people say, ‘if they managed to go around the world with renewable energy and energy savings, then we should be able to do it in our daily life,’” said Piccard.

The Solar Impulse project is sponsored by private companies such as Solvay, Omega SA, Deutsche Bank, Altran and Swisscom. The technical expertise is provided by EPFL (Swiss Federal Institute of Technology), the European Space Agency and Dassault.

Although, the model flown recently, known as HB-SIA, looks like a glider from the side, it has an impressive 200 ft. wingspan—the same as that of a modern passenger jet plane. It has 4 gondolas hanging below the wings that contain a motor as well as heavy lithium batteries for storing solar energy.

The highlight of the HB-SIA is an impressive 656 square ft. of photovoltaic cells attached to the top of its wings and tail. These cells are designed to absorb the sun’s rays to propel the plane and store the excess energy in the batteries for night flight.

The next model HB-SIB that is set to come out next summer will also have a pressurized cabin in order to enable the plane to cruise at a 40,000 ft. altitude, thus enabling trans-continental and trans-oceanic non-stop flights.

The team hopes that improvements in technology can create batteries that are more efficient and lighter in weight. This would allow for a second pilot seat and make possible a real non-stop circumnavigation around the world, as pilots could relieve each other and rest on the go.