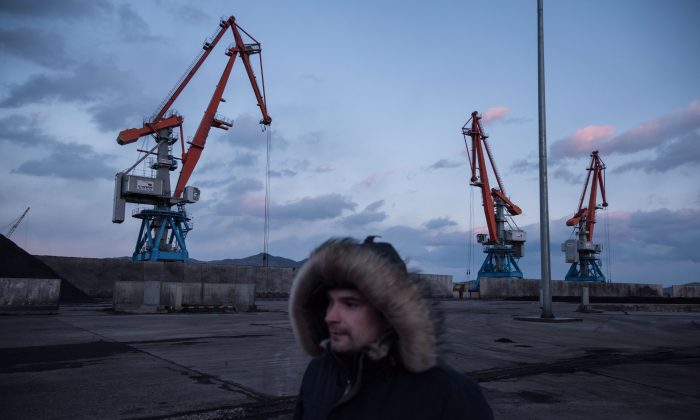 A Russian worker walking past cranes at the RasonConTrans coal port at Rajin harbour in the Rason Special Economic Zone on Nov. 21, 2017 . (Ed Jones/AFP/Getty Images)
China

The first shipments of Russian coal and crude oil, paid for in yuan, will arrive in China in April and May, respectively. Chinese state media used the opportunity to denigrate the United States, claiming that the international status of the U.S. dollar is “at risk.” However, financial expert Albert Song believes that it will not affect the U.S. dollar’s status as the leading global reserve currency.

Fenwei Energy Information Service Co., China’s leading information and service provider to the coal and coke industries, revealed that several Chinese companies purchased Russian coal in Chinese currency in March, and the first shipment would be made in April. This is also the first shipment of Russian commodities paid in yuan to arrive in China after Russia was sanctioned by Western countries.

Fenwei did not specify on which date the shipment was expected to arrive.

In addition to coal, Chinese buyers also used yuan to purchase Russian crude oil. The first ESPO (Eastern Siberia Pacific Ocean) crude oil will be delivered in May, according to a commentary published in early April on Cngold.org, a Chinese online media outlet about investing.

Citing the purchases from Fenwei, the article stated that payments in U.S. dollars will become less popular.

“Russia announced that it would only accept payments in rubles for Russian oil and natural gas, which turned the United States and European countries from those who impose sanctions to those who are subjected to sanctions,” the commentary said. “Chinese yuan seized the opportunity and began to reveal its potential in global trade payments. Now that coal and oil paid for in yuan will arrive in China, the international community [will] become green-eyed [at our success].”

On April 23, Albert Song, a researcher at Tianjun, a politics and economics think tank, told The Epoch Times that the recent Chinese purchases of Russian commodities in yuan will not affect the international status of the U.S. dollar, “because these are only bilateral trades between China and Russia, not multilateral trades involving other countries. ”

Song has 27 years of professional experience in China’s financial industry, focusing on research in China’s politics and economics.

When touting the growing influence of Chinese currency, the article on Cngold.org also revealed that the Chinese regime is currently negotiating with Saudi Arabia, planning to use renminbi to price crude oil, in part.

Song disagrees with the commentary’s conclusion that Chinese yuan is an emerging star on the international market.

“The most important thing is that a country’s sovereign currency is recognized by many countries. Although the Chinese Communist Party claims that the renminbi is on the path of internationalization, the share of renminbi’s international payments over the years has only been 3.2 percent because it is a government-controlled currency and cannot be freely exchanged. It is therefore a currency with poor credit to begin with,” Song commented.

On April 7, the European Union announced the fifth round of sanctions against Russia, including a ban on coal imports from Russia.

The toughest sanction so far is to cut Russian banks from the global financial system. After Visa and Mastercard suspended services in Russia, Russian banks indicated that they planned to issue cards using China’s UnionPay system.

As China’s largest credit card brand, Unionpay cards are issued in over 70 countries and regions.

However, Russian news agency RBC reported on April 20 that China’s UnionPay refused to cooperate with Russian banks for fear of being sanctioned, leaving Russia with fewer options for a credit card provider for its global business.

“China UnionPay chooses not to cooperate with Russian banks, for fear that itself will get implicated in the sanctions. The CCP needs the New York Clearing House interbank payments system to obtain dollars. Sanctions against China will block it from earning foreign exchanges through exports,” Song explained.

He further elaborated that there are three driving forces for China’s economic growth—foreign trade, investment, and consumption.

“All three are in decline. If additional sanctions are imposed on China, it will be an unbearable situation for China’s economy,” he said.