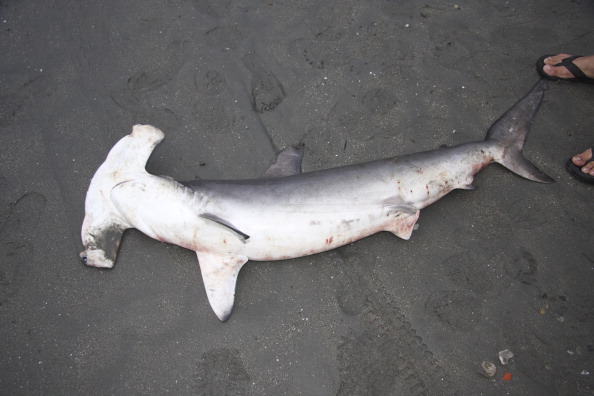 Many, if not most, of our large terrestrial predators – lions, tigers, bears, and wolves – have enjoyed Endangered Species Act (ESA) protections for decades. It makes sense. People tend to persecute large predators based on exaggerated fear or because they are inconvenient. Large predators, or the products made out of them, are often also commercially valuable, so these animals are frequently targeted for exploitation. It’s clear that these species often need legal protection – from us.

Hammerheads, © ColombiaTravel Large predators, perched at the top of food chains and needing healthy prey populations and large habitats to survive, are also frequently among the first creatures to slide towards extinction as humanity unravels and exploits their ecosystems. The reverse is also true: When we take care of large predators, we can be pretty sure we are also taking care of the rest of the ecosystem that sustains them. These same conditions that exist on land are also at work in our oceans. This is why Defenders identified sharks – the ocean’s top predators – as a group of species on which to focus our conservation efforts. But until just last week, the United States had never conferred ESA protection on a single shark species. Now, fortunately, the tide is turning.

Scalloped hammerhead sharks were already considered endangered by a team of experts at the International Union for the Conservation of Nature (IUCN). The IUCN is among the most highly respected scientific authorities in the world, gathering and distributing neutral scientific information on the conservation status of thousands of species. See www.iucn.org/about/ However, the IUCN’s findings lack the force of law – and that is why last week’s ESA listing is so significant.

Shark fins, © NOAA Scalloped hammerheads are among the most imperiled of migratory shark species because they are prized for their valuable fins. Where hard data is available, we know that their populations have declined by 99% in the Mediterranean Sea and off South Africa, 98% off the U.S. East Coast, and 76-89% in the Northwest Atlantic. Because scalloped hammerheads reach sexual maturity relatively late in their lives and produce few young, overfishing can have a significant impact on the population’s future. They also frequently “school” in certain locations, making them an easy target. Even when caught unintentionally and carefully released, they are unlikely to survive the stress of capture. In short, the biology of this species makes it the wrong sort of species to target regardless of the value of its fins.

Last year, Defenders and our partners helped secure the scalloped hammerhead shark a listing on Appendix II of the Convention on International Trade in Endangered Species, which is meant to address conservation issues affecting commercially exploited species on an global scale. However, the Appendix II listing still allows continued commercial trade so long as the governments controlling the areas where the species is caught certify that the catch was sustainable – obviously not an extremely effective protection considering how some governments (and their fishing interests) define sustainable. With the ESA endangered listing, the United States has determined that catching scalloped hammerheads in these areas is not sustainable – period. More importantly, it is now illegal for anyone under U.S. jurisdiction to possess, buy or sell scalloped hammerhead sharks or their fins from these areas.

Thankfully, at least the United States is now doing its part to protect some of the most direly threatened populations of scalloped hammerheads –recognizing the well-established science and getting out of the business of exploiting these creatures for profit. Given that the IUCN has found that nearly a quarter of the world’s sharks, skate and ray species are threatened with extinction, NMFS’s action is only a start – but it is a significant milestone we should both recognize and appreciate. A shark is finally protected under the ESA! There’s plenty more work to do to protect this and other shark species. Defenders will continue our efforts to protect our ocean ecosystems by using the ESA to save their most vulnerable and ecologically important top predators. We are finally starting to see the change we have hoped for. Let’s take a moment to say good work to NMFS and carry on with the job.

This article was originally written and published by Jay Tutchton, staff attorney for Defenders of Wildlife. For the original article and more information, please click HERE.