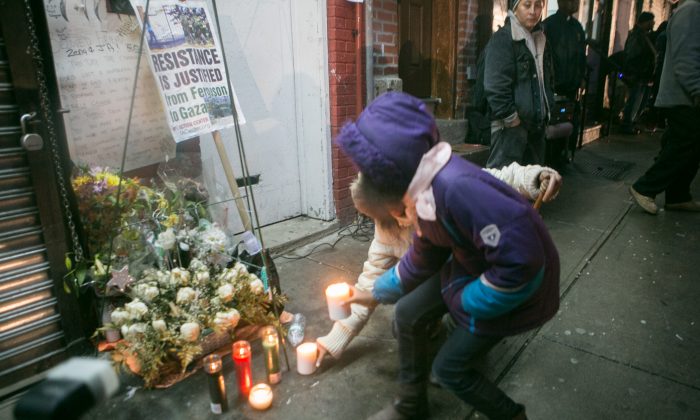 Children place candles on a memorial flowers at the location where Eric Garner was placed in a chokehold by a NYPD officer in Staten Island, on Wednesday. (Benjamin Chasteen/Epoch Times)
News

I got to know some law enforcement officers pretty well. It came from working in the projects and volunteering for Juvenile Court. The two who were women were notably goddess-like. I could see Sheriff Sylvia Shepherd on a plinth holding a scepter, nobly gazing down at those she was sworn to protect. Both of the female officers were tall, warm in demeanor, and only too aware of the dangers in the world.

They had genuine altruistic streaks. I remember one of the male officers doing his utmost to mentor and encourage students. Shepherd did, too. Among other good deeds, she encouraged people to pony up donations to buy Christmas presents for children and teens in state custody.

I cannot imagine those people killing an innocent civilian. But it happened in their department, to Kathryn Johnston, who was 92 years old. Police fired 39 shots at her and handcuffed her as she lay dying, according to prosecutors. Those officers did go to prison.

One of them, Greg Junnier, who was the first to tell the truth about the killing, said at his sentencing hearing, “I used to think I was a good person,” according to CNN.

What went wrong with the cops on Staten Island?

How could anyone with a drop of human kindness keep pressing on a man’s windpipe as he repeatedly said, “I can’t breathe?” How could any grand jury not indict Officer Daniel Pantaleo for murder? This one was a shock. With Michael Brown, the autopsy evidence and half-a-dozen eyewitnesses backed up Darren Wilson’s account of what happened. With Garner, what justifies Officer Pantaleo’s actions?

After Eric Garner died on July 17, I watched the cellphone video that his friend Ramsey Orta took. Had I been on that grand jury, I would have recommended a murder indictment for Pantaleo. Had I been the prosecutor, I would have just shown the jurors the footage.

Context and unexamined assumptions can make people lose their moral bearings. I imagine the men who surrounded Garner thought they were projecting authority when someone resisted arrest.

They probably felt they were showing courage and keeping the streets safe.

They may have read the tall, heavyset Garner as a brute and a menace, seeing him through the lens of a centuries-old racist lie.

They may have been following the broken windows theory, that it keeps an area safe to take care of small crimes before they become large crimes.

It was even more heartbreaking to know that some in the group were paramedics who did nothing to revive him.

This week Cheyenne and Arapaho runners honored the memories of two brave men. They were Capt. Silas Soule and Lt. Joseph Cramer, both of whom refused to take part in the Sand Creek Massacre in Colorado, 150 years ago.

Soule and Cramer witnessed but ordered their men not to participate in Col. John Chivington’s Nov. 29, 1864, attack on Cheyenne and Arapaho camped along a dry creek bed. Many of the tribal members killed were women and children.

The Cheyenne and Arapaho runners touched the stone on Soule’s grave in Denver’s oldest cemetery after trekking from the scene of the Sand Creek massacre on the plains about 180 miles away.

Of the many who were present at Garner’s death, none took the roles of Soule and Cramer. At least his friend Orta tried to bear witness. He was arrested. But if any among those officers and first responders had been true to their callings, they would have stood up and said, “This is wrong.” They might have saved Garner.

If enough grand jurors had resisted the majority view of their group, at least one step might have been made in the direction of justice.

Colorado Gov. John Hickenlooper said of the Sand Creek Massacre. “We should not be afraid to criticize and condemn that which is inexcusable.”