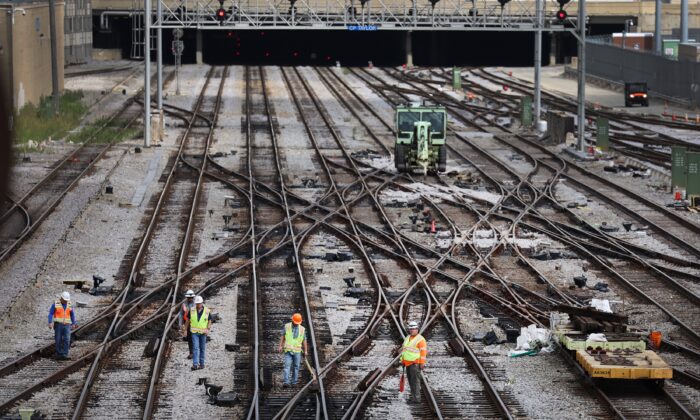 Workers service the tracks at the Metra/BNSF railroad yard outside of downtown Chicago, on Sept. 13, 2022. (Scott Olson/Getty Images)
US News

One of the unions representing U.S. rail workers has voted to authorize a strike while two others ratified agreements as a deadline for negotiations nears.

International Association of Machinists and Aerospace Workers (IAM) members voted to reject a tentative agreement with railroads, the union said in a statement on Sept. 14.

While the approximately 4,900 members also voted to authorize a strike, they agreed to delay the strike until Sept. 29 to enable talks to continue toward an agreement that the members would accept.

“IAM freight rail members are skilled professionals who have worked in difficult conditions through a pandemic to make sure essential products get to their destinations. We look forward to continuing that vital work with a fair contract that ensures our members and their families are treated with the respect they deserve for keeping America’s goods and resources moving through the pandemic,” the union said.

Ten unions, including IAM, recently reached tentative agreements with the National Carriers’ Conference Committee, which represents all Class I freight railroads and many smaller railroads in the United States.

Two other unions, the Transportation Communications Union/IAM and the Brotherhood of Railway Carmen, ratified agreements with the committee later Wednesday. The unions represent more than 11,000 workers between them.

“Ratification by a third union, the International Association of Machinists, was unsuccessful,” the committee said in a statement.

Twelve unions in total are trying to hammer out deals with the biggest railroads in the nation, assisted by top officials in President Joe Biden’s administration.

Negotiations on new contracts for about 115,000 workers started in 2020, but a lack of progress prompted Biden to establish an emergency board to make proposals.

The board in August recommended boosting pay by 24 percent over five years, including an immediate 14 percent pay increase, and five annual lump sum $1,000 payments, among other proposals.

Members of IAM and the International Association of Machinists rejected the tentative pacts, and two other unions have never reached even tentative agreements.

One of them, the International Association of Sheet Metal, Air, Rail, and Transportation Workers-Transportation Division, said on Sept. 9 that it is “abundantly clear from our negotiations over the past few days that the railroads show no intentions of reaching an agreement with our Unions.”

Biden has tasked Labor Secretary Marty Walsh to try to help hammer out a deal. He was hosting a meeting in Washington on Sept. 14.

“All parties need to stay at the table, bargain in good faith to resolve outstanding issues, and come to an agreement,” White House press secretary Karine Jean-Pierre told reporters while flying to Michigan. “A shutdown of our freight rail system is an unacceptable outcome for our economy and the American people, and all parties must work to avoid just that.”

In preparation for possible strikes, railroads have begun scaling back service and implementing embargoes on hazardous materials that shouldn’t be left in certain places for too long.

“While we are hopeful that parties will reach a resolution, Amtrak has now begun phased adjustments to our service in preparation for a possible freight rail service interruption later this week,” Amtrak said in a statement.

The Association of American Railroads said in a recent report that a strike could cost more than $2 billion per day.