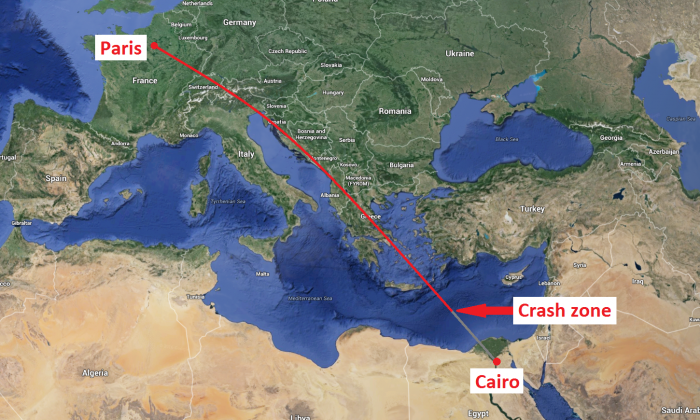 The Egyptian Armed Forces spokesman released, via Facebook, images of the first pieces of wreckage salvaged from EgyptAir Flight 804 on Saturday.

The aircraft had been cruising normally in clear skies on a nighttime flight from Paris to Cairo early Thursday when it suddenly lurched left, then right, spun all the way around and plummeted 38,000 feet (11,582.4 meters) into the sea, never issuing a distress signal.

All 66 passengers are presumed dead.

Moments before the plane plummeted into the Mediterranean, smoke was detected on board in multiple places. But the cause of the crash remains unclear, a French air accident investigation agency said on Saturday.

The former head of flight operations for the U.K.’s Civil Aviation Authority says that there might have been a struggle on the flight deck of the EgyptAir plane that crashed on Thursday morning.

“One’s inclined to go towards the theory that there had been some interference on the aircraft, and on the flight deck, with the control of the aircraft,” Captain Mike Vivian was quoted as saying via The Independent.

David Learmount, former RAF pilot and Consulting Editor at Flight Global, said caution should be urged in lieu of any official explanation about Thursday’s crash.

“My money and a lot of people’s money is on this being sabotage, [though] it’s not certainly that,” he stipulated, according to Sky News. “I think the bomb is the more likely. With the fast turnarounds that aeroplanes do today, it’s quite difficult to check every part of them,” he added.

The flight took of at 11:09 p.m. (local time) on May 18 from Charles de Gaulle Airport in Paris, France and radar contact was lost at 2:45 a.m. on May 19 above the Mediterranean Sea between Greek island of Crete and Egypt.


The Associated Press contributed to this report.