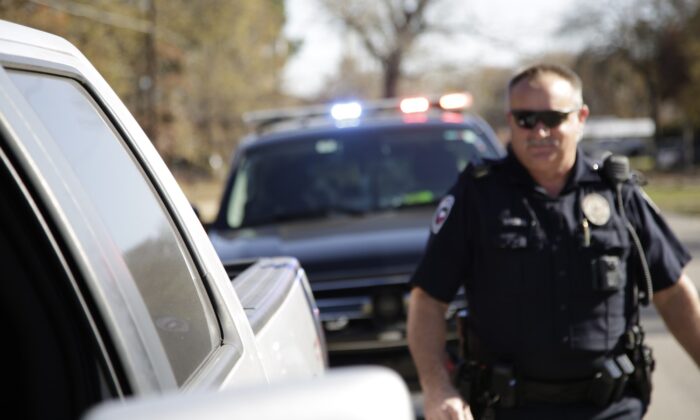 Ohio Gov. Mike DeWine announced on July 6 the launch of the state's eWarrant program which provides counties a faster way of issuing more information in arrest warrants that can be shared with state-wide and federal law enforcement agencies. (Photo courtesy Police1.com)
Policies & Impacts

Meigs County in southeastern Ohio’s Appalachian region is leading the way among counties in the state to make law enforcement easier, if not safer, for officers and citizens.

The goal and mission of the program are for faster input and access to arrest warrant information, including on protection orders, state and federal background checks, and Tier I crime offenders (sexual-related crimes), through the a database that can be accessed state-wide.

Meigs County, which has a population of slightly more than 22,000, is the first of Ohio’s 88 counties to sign on to the $4.7 million state-funded eWarrant project that was awarded to Dayton, Ohio-based Lexis Nexis, which provides data analytic services and databases. InnovateOhio, which coordinates and shares data and resources across the state, coordinated the development of the new eWarrants database between the Ohio Department of Public Safety and the Ohio Department of Administrative Services.

All counties are being encouraged by the Department of Public Safety to get on board with the program, as the state works with the 19 vendors to integrate the system to make it more compatible for everyone to access for the latest information on who the potentially dangerous criminals are.

Within minutes after an arrest warrant is issued, the new information is added to the warrant databases, such as LEADS (Law Enforcement Automated Data System) and NCIC (National Crime Information Center). These databases that are used by the Ohio State Highway Patrol, and can also be shared with other state and federal agencies.

Given the current environment in the United States, involving the school shooting in Uvalde, Texas, and the shooting during the July 4 parade in Highland Park, Illinois, that left seven dead, more up-to-date information in the system can make it safer for an officer to know who they are dealing with when making a traffic stop or serving a warrant. It also can allow an officer to see who could be in possession of a firearm when they shouldn’t be.

“We need to have an extra edge,” Meigs County Sheriff Keith Wood said. “When warrants and other important information aren’t in the system, it creates a public safety problem.”

During a press conference at the unveiling of the program, DeWine and Lt. Gov. Jon Husted described it as “easy and free,” but said that steps need to be taken by the state’s General Assembly to make it mandatory. Upgrades are also needed for systems like in some courts, where warrant information is still recorded on typewriters.

“Having this system is critical in helping court clerks, law enforcement officers, and gun shop owners have more information in a timely manner,” DeWine said.

Soon after taking office in 2019, DeWine ordered the development of the eWarrants technology after an analysis by his Warrant Task Force discovered that an untold number of Ohio arrest warrants and protection orders were slow to be or were never entered into LEADS and NCIC. That was because of the fragmented, inefficient, and technologically-obsolete warrant entry practices in use by many courts and law enforcement agencies in Ohio, according to information from DeWine’s office.

Since 2019, the number of Ohio warrants entered in NCIC by Ohio law enforcement agencies has increased from 18,117 in March 2019 to 220,206 in June 2022. DeWine’s administration also created the Ohio Prisoner Extradition Reimbursement Program, which reimburses local agencies for the cost of extraditing dangerous wanted offenders who have been arrested out-of-state or in another jurisdiction on an outstanding warrant.

“Databases are only as good as the information that is put in them, whether it’s accurate, or whether that information has been put in there at all,” Dewine said during a press conference at the program’s unveiling. “When a criminal or someone with an outstanding warrant that isn’t in the system crosses the (Ohio) river into West Virginia or in Kentucky, and a law enforcement officer happens to pull them over, it makes for a dangerous situation if that officer doesn’t have the information to know who they are dealing with.

“It is critical information for officers to know when they make a traffic stop,” DeWine added. “In some cases, it can be a matter of life or death. Agencies that use the eWarrants interface will be able to get up-to-date, comprehensive information into the hands of law enforcement nationwide almost immediately so that they can better protect the public, protect themselves, and prevent the illegal purchase of firearms. This is critical in helping court clerks, law enforcement officers, and gun shop store owners have information in a more timely manner.”

Meigs County Court of Common Pleas has reduced its bench warrant filing time to as little as 12 minutes, as opposed to the previous days-long process that involved the hand-to-hand transfer of paperwork between agencies and duplicative data entry into multiple case management systems, according to Judge Linda Warner.

“We know time and information matter,” Warner said. “We want to be faster and provide a more seamless way of doing this.”

In addition to Meigs County, Champaign County in southwestern Ohio signed on to the eWarrant program on June 29.

“Number 1, this is about safety,” Lapp told The Epoch Times. “This system helps us streamline everything, and captures information on someone’s history. When we see their history, we know what they’ve done in the past, or what they have an active warrant for. This helps provide real-time information and more situational awareness.

“We’re hoping our neighboring counties sign up for this and this becomes more active across the state in the near future.”