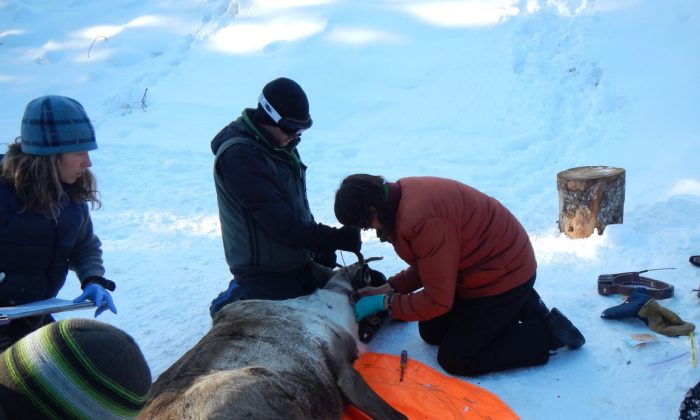 Members of the Northern Caribou Maternity Penning Project add a radio collar and take blood samples from a female caribou near Chetwynd, B.C. The pregnant female will live in a secure penned area for protection from predators and be fed and monitored until she delivers her calf and they are both strong enough to be released back into the open range in July. (CNW Group/West Moberly First Nations)
Canada

‘We had to step in,’ says chief
By Justina Reichel

The rapidly approaching extinction of a herd of woodland caribou in northern British Columbia has prompted local First Nations to initiate a unique conservation project in an effort to stop the decline.

The First Nations communities of West Moberly and Saulteau are leading a project that includes the creation of a “maternity pen” to save the Klinse-Za caribou herd, which has been reduced to just 20 animals.

A first in northern B.C., the goal is to protect vulnerable pregnant caribou and their newborn calves from predators during gestation and the first few weeks of nursing.

“We had to step in and try to do something. Our community and the Saulteau First Nations community didn’t feel it was proper for us to sit by and watch these animals disappear off the face of the earth,” says Roland Willson, chief of the West Moberly First Nation, located in the Chetwynd area.

Caribou were once in such abundance in B.C.’s north that elders referred to them as seeming like “bugs on the landscape,” says Willson.

But today, according to the band’s estimates, caribou in the entire south Peace region number only 1,100 and are in rapid decline.

The Klinse-Za herd has been declining since the 1960s after a reservoir created by the construction of the W.A.C. Bennett Dam blocked a key migration route. Disturbance from natural resource extraction and increased predators in the area have also added fuel to the flame.

The population has fallen by about 80 percent in the past two decades. In 1995 numbers were at 190; today they are down to a mere 20—despite the fact that West Moberly members haven’t hunted them since the 1970s.

Caribou populations in the region were listed as a threatened species under the federal Species at Risk act in 2003, but no recovery strategy was put in place.

Under the new pen project, 10 pregnant cows were gathered in late March and enclosed in a protective, screened, four-hectare area within their natural calving range near Chetwynd. The secured caribou are being fed and monitored around the clock by members of the West Moberly and Saulteau communities and the project team, which includes wildlife biologists.

This protective area will give the calves a chance to stabilize and develop the ability to flee from predators such as wolves, bears, and coyotes before they and the cows are released back into the wild in July.

“You have to give them as much of a fighting chance to get established and get their legs under them before they are released out into the chaos that’s out there,” says Willson.

The team has committed to a multi-year program to ensure herd numbers are rejuvenated, and hopes to grow the herd to about 100 animals within the next five years. Longer-term goals include the rehabilitation and reestablishment of the herd’s habitat.

Financial assistance for the project is being provided by the government’s Forests, Lands and Natural Resource Operations, with support also coming from community groups and local industry.

It isn’t the first time West Moberly has fought to protect its local caribou. Two years ago, the band won a court fight over the province’s decision to allow coal mining exploration in local territory that could negatively impact the endangered Burnt Pine caribou herd.