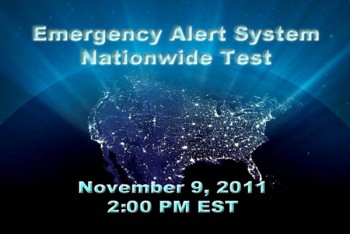 Announcement countdown from the FCC's website marking the date and time of the natio's first test of the Emergency Alert System. (Courtesy of fcc.gov)
US

The “this is only a test” message that everyone has heard on TV or radio will be seen and heard simultaneously across the country this week, when the Emergency Alert System (EAS) transmits it on Nov. 9 at 2:00 p.m. (Eastern Standard Time). The purpose is to “assess the reliability and effectiveness of the EAS as a public alert mechanism,” according to a statement from the system.

EAS participants, including television and radio broadcasters, satellite radio and satellite television providers, as well as cable television and wireline video providers, perform state and local weekly tests, but this will be the first nationwide test. No review of the entire system has happened until this week.

According to the FCC, the Federal Emergency Management Agency (FEMA) will use the results of the test to assess the reliability of the EAS mechanism and make improvements if needed.

The EAS started in 1994. It replaced the Emergency Broadcast System (EBS) that began in 1963. The EAS informs the public about emergencies and weather events.

The test will last approximately 30 seconds. Due to limitations with the system, some viewers or listeners may not hear the “this is a test” message, but may receive the message as if it were not a test. This is due to the same codes being used to trigger the message as would be used in an actual emergency.