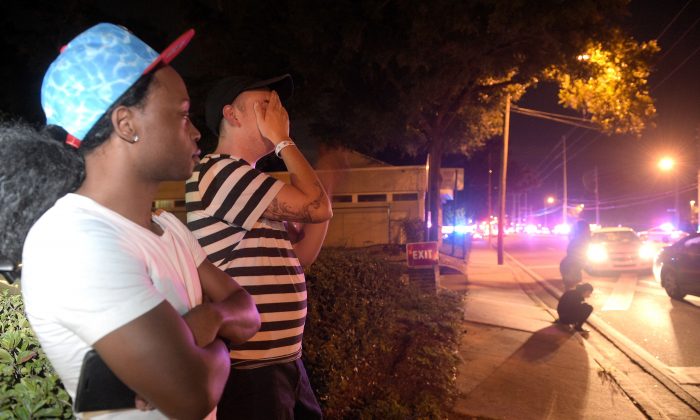 Jermaine Towns, left, and Brandon Shuford wait down the street from a multiple shooting at a nightclub in Orlando, Fla., Sunday, June 12, 2016. Towns said his brother was in the club at the time. A gunman opened fire at a nightclub in central Florida, and multiple people have been wounded, police said Sunday. (AP Photo/Phelan M. Ebenhack)
US

The first victims of the Orlando nightclub shooting that left at least 50 people dead and 53 injured have been released.

They were shot at the Pulse Orlando nightclub in the early hours of June 12 after a shooter opened fire. The city of Orlando on Sunday afternoon released the names of the deceased after contacting their family members:

Many bodies were left inside the nightclub for hours after a SWAT team raid took place at around 5 a.m., ABC News reported. That is the reason for the delay in the release of names, officials said.

The city of Orlando also set up a website for the victims, Mayor Buddy Dyer tweeted.

https://t.co/ITWG4MzSU0 may be slow to load due to large amounts of traffic on our site.

“On this very difficult day, we offer heartfelt condolences to today’s victims and their families. Our City is working tirelessly to get as much information out to the families so they can begin the grieving process. Please keep the following individuals in your thoughts and prayers. #PrayforOrlando,” the website stated.

Obama: Orlando Shooting an ‘Act of Terror and an Act of Hate’
Man Driving with Guns, Explosives Arrested While Going to LA Pride Parade: Reports

Omar Mateen, 29, was identified as the shooter. He pledged allegiance to ISIS, or the Islamic State, right before the terrorist attack, according to reports.

Stanley Almodovar III was one of 50 people that was shot and killed at #PulseNightclub in #Orlando. #FOX35 pic.twitter.com/hBa1AfDsop

NBC News reported that he was under an FBI investigation—one in 2013 and another in 2014. Coworkers said he made “offensive” comments to them about Islamic propaganda. He also had ties with an American who went to the Middle East to become a suicide bomber.

“We are saying we are apologizing for the whole incident,” Mateen’s father, Mir Seddique, said. “We weren’t aware of any action he is taking. We are in shock like the whole country.” His father said that religion wasn’t a motivating factor.

“We condemn this monstrous attack and offer our heartfelt condolences to the families and loved ones of all those killed or injured. The Muslim community joins our fellow Americans in repudiating anyone or any group that would claim to justify or excuse such an appalling act of violence,” the Council on American-Islamic Relations Orlando Regional Coordinator (CAIR) Rasha Mubarak said in a statement.