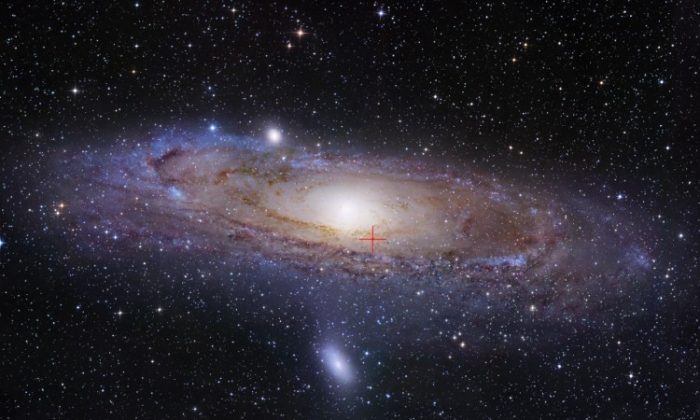 A microquasar or moderate-sized black hole consuming matter from a companion star has been found in our neighboring Andromeda Galaxy.

Named XMMU J004243.6+412519, the object is 2.5 million light-years away. Its black hole probably has a mass 10 times that of our sun, and is devouring material from the star into a hot, rapidly rotating disk, which is emitting X-rays and subatomic particle jets that produce radio waves.

“This is, we think, the same mechanism at work in quasars at the cores of galaxies, where the black holes are millions of times more massive,” said research team leader Matthew Middleton at England’s University of Durham in a press release.

“However, in the smaller systems, things happen much more rapidly, giving us more data to help understand the physics at work.”

Learning more about this mechanism will help shed light on our early universe, when quasars are believed to have been important in the distribution of matter and energy.

So far, microquasars have only been detected in the Milky Way. Finding this bingeing black hole in Andromeda is a missing link that explains previously observed ultraluminous X-Ray sources (ULX), which astronomers thought were either large black holes eating slowly or smaller ones feeding rapidly.

“Obscuration within our galaxy makes it difficult to study the disks of these microquasars in the Milky Way, but finding one in a neighboring galaxy means we probably can find many more, thus helping our efforts to better understand their physics,” Middleton concluded.

The research was published in Nature on Dec. 12.