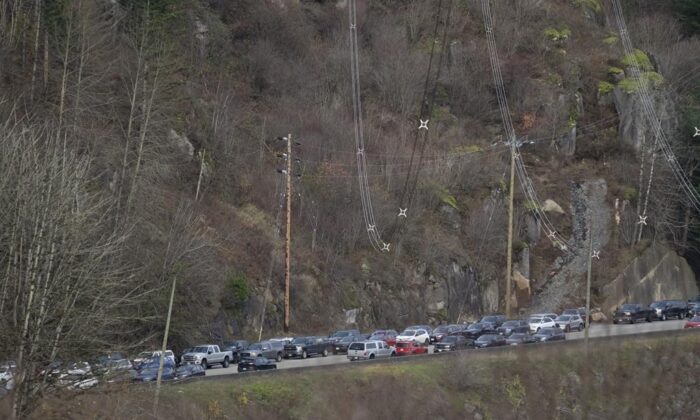 Stranded vehicles are seen where a mudslide happened earlier in the week on Highway 7 west of Agassiz, B.C., November 17, 2021. (The Canadian Press/Jonathan Hayward)
Canada

VANCOUVER—A handful of Armed Forces members have arrived in British Columbia, the first of what Prime Minister Justin Trudeau has said could be several hundred troops as the federal government moves to help the province recover from devastating floods.

Other troops have been put on high alert and will start to assemble and deploy into the area once the advance team and provincial government determine where they are needed most.

At the same time, a C-130 Hercules is on its way from CFB Trenton while one helicopter from CFB Edmonton and another from CFB Esquimalt are on standby.

Premier John Horgan has declared a state of emergency in response to flooding and landslides that began Sunday after record rainfall drenched much of southern B.C. for more than 48 hours.

One person is confirmed dead in a landslide that swept vehicles off a road near Pemberton and the search continues for more victims, while flooding has left much of the Fraser Valley under water, killing thousands of farm animals in what officials are calling an agricultural disaster.