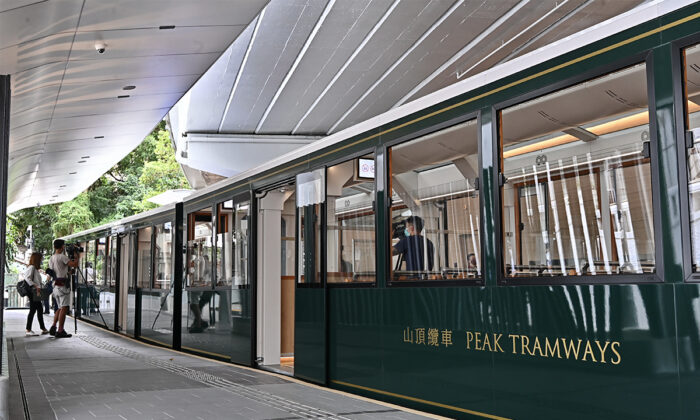 The Peak Tram which has been closed for more than a year reopens on Aug. 27, when the sixth-generation new tram will be officially put into service. Peak Tramways Company held a media tour prior to the reopening.

The new generation tram was made in Switzerland and carries a modern classic design concept with its body in the iconic green to pay homage to the earlier third and fourth generation trams. The new tram can carry 210 people, compared with 120 in the previous version showing an increase in passenger capacity of 75 percent. The floor adopts a wave prototype design to increase the safety of passengers when standing. The window size of the new tram is 30 percent larger than before, and the top is also equipped with a sunroof.

There are 22 more seats facing downslope which allows passengers to see the view of the Victoria Harbour when going downhill. Four wheelchairs and four stroller spaces have also been added to the tram for the convenience of parents and the disabled.

In the past, the Central Tram Terminal was always overcrowded. However, the capacity of the Terminal has been increased from 420 to 1,300, and waiting time should be reduced by more than 70 percent. In addition, there are no steps from the entrance to the platform of the Terminal, as the height of the platform was adjusted to be the same as the tram floor.

The general manager of The Peak Tram, Tsang Ying-mei said that the price increases are necessary because of the increase in operation costs, and the impact of the epidemic on the global supply chain in the past two years which led to project delays and rising costs, there was an overrun of about HK$120 million ($15.3 million) as a result. It is, therefore, necessary to increase the tram fares, but she believes that passengers will find the new tram experience “worth the money spent.”

As for whether tram fares will be increased in the next five years, she said it will depend on the future business environment. Whether break-even can be achieved will also depend on the epidemic situation. Currently, they are focused on changing their market focus from visitors to local customers. Other than their recent cooperation with the Hong Kong Tourism Board to launch preferential packages, Peak Tram will also launch different promotion campaigns itself, hoping to increase the interest of locals to ride the tram. She believes there will be 11,000 rides per day at the initial stage of the tram’s reopening, similar to the last day of operation before the refurbishment last year.

The Peak Tram was upgraded in two phases as early as the end of 2018. The second phase of the project started at the end of June last year, which included the replacement of haulage and control systems, signaling, new cable cars, and tracks, as well as the renovation of both the Central and the Peak Tram Terminals to accommodate a larger number of passengers to meet the trams capacity increases. According to previous information, the entire project was originally expected to cost HK$684 million ($87.2 million) and be completed before Lunar New Year last year.