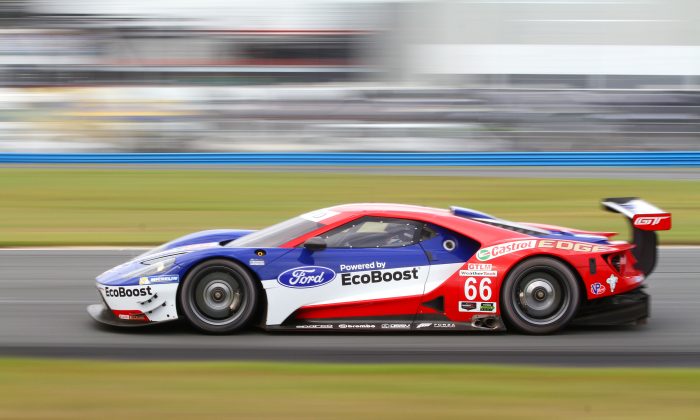 WSCC teams test their 2016 cars at Daytona
By Chris Jasurek

Included were the new Ford GT, BMW’s new M6, a handful of new GT3 entries which the series is admitting starting in 2016, and a SpeedSource Lola-Mazda with a 2-liter turbocharged gasoline power plant in place of the turbo-diesel. Also, the Shank Racing Ligier was out testing its new 3.5-liter Honda turbo. The DeltaWing, a few Coyote-Corvettes, and a few LMPC Orecas filled out the field.

Also in attendance were three Mercedes-AMG coupes: one 2016 AMG Mercedes coupe which might show up halfway through the season, and a pair of Mercedes-Benz SLS AMG GT3’s which DragonSpeed Racing hopes to campaign, should Mercedes decide to spend the Series Manufacturing Partner money.

The weather cooperated, but not in the usual sense. Tuesday was perfect: sunny, dry, pleasant—perfect racing weather. Wednesday was gloomy, muggy, intermittently rainy—a good change of conditions for teams to have to cope with. These same conditions could well obtain during the 2016 Rolex 24; it might be good that the crews have some experience with them.

The test was held as much for IMSA as for the teams; the series used the test to gather initial Balance of Performance data for the 2016 season. Further data will be amassed at the Roar Before the 24 in January 2016, in preparation for the Rolex at the end of that month.

In any case Chip Ganassi Racing’s new Fords were fast, as was the upgraded Shank Ligier.

The Mazda definitely liked its new motor; instead of chasing the GTs, it was chasing the Prototypes. The chassis will need a lot of development—it hasn’t really been tested at the kind of speeds the car is now capable of—but at long last the car should be a contender.

There were a lot of unusual driver/car combinations at the test. Joey Hand and Sebastien Bourdais drove the Ford, though only Hand seems to be in contention for the full-time ride. Also mentioned as possibles were Olivier Pla (who co-drove at the test,) Ryan Briscoe, Marino Franchitti, Dirk Muller, and Richard Westbrook.

VisitFlorida Racing has announced Ryan Dalziel and Marc Goossens as full-time drivers for its #90 Coyote-Corvette.

Next up on the WSCC schedule is the two-day Roar Before the Rolex 24 test Jan. 08–10, 2016 at Daytona International Speedway.