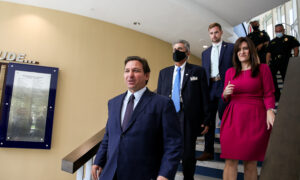 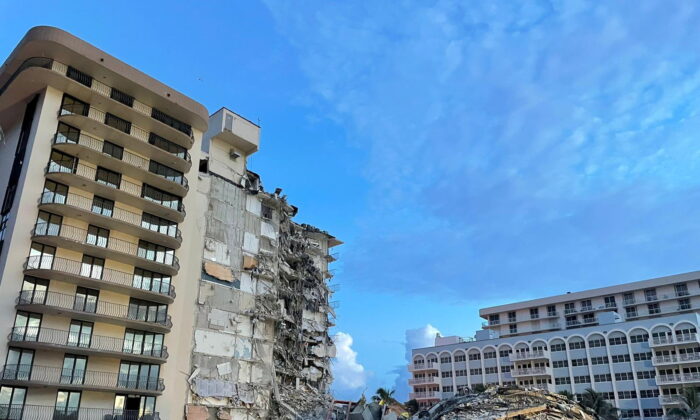 A partially collapsed building in Surfside, near Miami Beach, Fla., on June 25, 2021. (Miami-Dade Fire Rescue Department/Handout via Reuters)
US News

Just hours after a condo building partially collapsed in Miami, what is believed to be the first lawsuit was filed against the building’s owners.

A lawsuit filed by the Brad Sohn Law Firm on behalf of plaintiff Manuel Drezner and others seeks $5 million in damages from the Champlain Towers South Condominium Association, according to a lawsuit that was filed late on Thursday night.

Officials said Friday that at least four people have died and 159 are still unaccounted for following the collapse. The structure collapsed in the early hours of Thursday morning.

The legal complaint alleged that the condominium association failed to “secure and safeguard the lives and property” of the building’s residents.

“According to public statements made by Defendant’s attorney Ken Direktor, ‘repair needs had been identified’ with regard to certain structural issues but had not been implemented; one of the most breathtakingly frightening tragedies in the history of South Florida followed,” added the complaint.

The cause of the collapse is still being investigated.

Surfside Mayor Charles Burkett told news outlets on Thursday that roof work was being carried out on the building, and concrete restoration work was also planned.

“I am told it was proceeding fine and they were redoing the roof and the building inspector had been out there recently. I was told it was even yesterday,” Surfside Town Commissioner Eliana Salzhauer said on Thursday, according to Local10.

In 2015, separately, a resident of the Champlain Towers filed a lawsuit alleging one of the building’s outer walls wasn’t being maintained. The plaintiff, Matilde Fainstein, filed for damages in the Miami-Dade Circuit Court and alleged the owners “failed to repair or negligently repaired the common elements and the outside walls of the building,” reported Business Insider.

“As a lawyer, I can’t fix what is irreparable. But what I can do is fight to immediately fully compensate these victims so that they can focus all of their energy on healing as best they can,” Sohn said in a statement to Local10 about Thursday’s lawsuit. “Our investigation continues, but we strongly believe this was preventable. A lawsuit is necessary to force all parties to preserve documents and records regarding this building and ensure a thorough investigation into this tragedy. We are committed to compensating these vulnerable families, whether they have lost a loved one, lost the place they called home, or suffered injury.”

The Epoch Times has contacted the Champlain Towers South Condominium Association for comment.