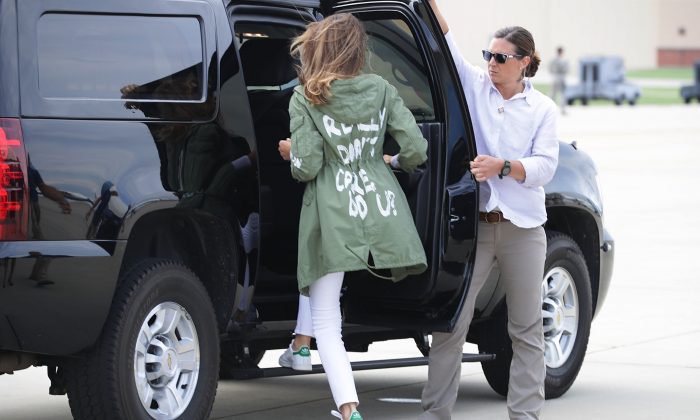 First lady Melania Trump (C) climbs back into her motorcade after traveling to Texas to visit facilities that house and care for children taken from their parents at the U.S.-Mexico border at Joint Base Andrews, Maryland, on June 21, 2018. (Chip Somodevilla/Getty Images)
Trump Administration

First Lady Melania Trump drew the attention of national media on June 21 with a message on a jacket she wore on a trip to visit illegal alien children held at facilities near the southern border.

The message on the back of the first lady’s jacket read: “I really don’t care. Do u?”

According to President Donald Trump, the message is a jab at the major media outlets that largely ignore the first lady or choose negative angles for covering her.

The message “written on the back of Melania’s jacket, refers to the Fake News Media,” Trump wrote on Twitter. “Melania has learned how dishonest they are, and she truly no longer cares!”

“I REALLY DON’T CARE, DO U?” written on the back of Melania’s jacket, refers to the Fake News Media. Melania has learned how dishonest they are, and she truly no longer cares!

The trip is the first lady’s first high-profile public appearance since she underwent surgery for a kidney condition on May 14.

Melania Trump wore the hooded green khaki jacket from Zara as she boarded the plane.

“It’s a jacket,” Stephanie Grisham, Melania Trump’s spokeswoman, said. “There was no hidden message. After today’s important visit to Texas, I hope the media isn’t going to choose to focus on her wardrobe.”

The first lady’s unannounced visit came a day after the president signed an executive order to modify a Clinton-era practice of separating children from their parents when they illegally enter the United States.

Melania Trump met with staff looking after detained children in McAllen, Texas, and met with officials and employees at the facility, where 55 children aged 12 to 17 are housed. Six of them were separated from their parents upon crossing the border, authorities told reporters.

Last year, national media ran intensive coverage of the first lady wearing high heels as she boarded Air Force One en route to Texas for a briefing on the devastation following Hurrican Harvey. Upon landing, the first lady emerged in jeans and sneakers.

“It’s sad that we have an active and ongoing natural disaster in Texas, and people are worried about her shoes,” Grisham said at the time.