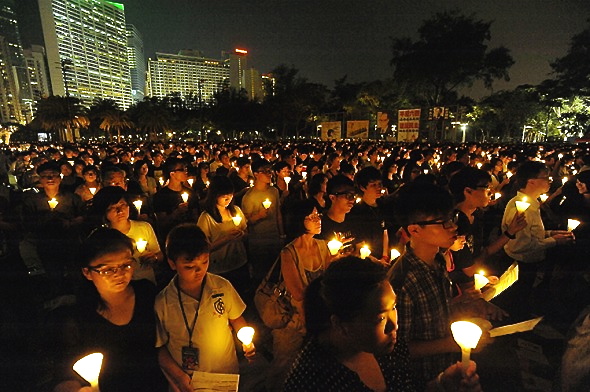 VANCOUVER—In one instant, the hopes of the people of Beijing were shattered and the life of one brave man was ended.

Although martial law had been declared and troops were in the streets at the beginning of June 1989, Beijing residents still hoped to protect the students at Tiananmen Square from having their democracy movement stamped out.

Wang Jue is a Chinese scholar who now lives in Vancouver, Canada. At a local coffee shop in Vancouver, he recalled what he saw on the night of June 3, 1989.

Wang calls himself a living fossil. Once jailed in China as a “counterrevolutionary,” he said he has always felt compelled to bear witness to what happened.

Martial law had been imposed and two or three military vehicles could be seen parked on many streets of Beijing. The soldiers were unarmed and didn’t take any action because they were there to con the people, Wang said.

For three days in a row, the soldiers were surrounded by students and citizens who tried to reason with them. One day an officer was so touched that he told a crowd of people, “Citizens of Beijing and dear students, we don’t kill students. Believe us. We do not have guns with us.”

The night of June 3, Wang said he and his wife went to Tiananmen Square and left after 10 p.m., returning to their home near the gate tower of Yongdingmen, a seven to eight minute bike ride to Tiananmen Square. There was still a huge crowd in the square.

Yongdingmen was opposite a train station. The station was full of soldiers, but in the street only two military vehicles were parked. Wang said only having two vehicles there was done in order to cause the people at Yongdingmen to lower their guard.

He was worried, wondering if military vehicles would be making any advances, so he rode on his bike to a street near the gate tower of Yongdingmen. There was a small crowd of people there. Most of the others who had been at Yongdingmen had gone to other places to block off military vehicles from entering the square.

Suddenly, a middle-aged woman hurried over on her bike. She was so nervous that her hair was standing on end.

She stopped and said loudly, “Citizens of Beijing and students, hide quickly. They [the soldiers] are fully armed. You can’t possibly stop them.” Then she left quickly.

Some people got scared and went home, but about two dozen people stayed and waited nervously, Wang said.

Then a formation of fully armed soldiers appeared. “They wore helmets and carried rifles equipped with bayonets, and ran at a fast pace,” Wang said.

“Then a Beijing citizen stepped forward. He was an intellectual about 37 or 38 years old, and at least 1.76 meters [5 feet 8 inches] tall. He was quite a handsome and dignified man. He looked like a professor or teacher to me,” Wang said.

“While every one was panicked and at a loss about what to do at gunpoint, this hero immediately sensed that the fully armed soldiers might crack down on the students who were still in Tiananmen Square. His first reaction was to protect the students.

Wang threw himself flat on the ground but couldn’t take his eyes off the man he calls a hero.

“I wanted to rush to him to rescue him so much, but I couldn’t,” Wang said. “Tears started to flow down my face. A man standing beside me was shot and fell to the ground, and his blood was all over the ground.”

About half a dozen people fell where they stood. Wang could see that all the soldiers had opened fire, and, after the troops passed the crowd, the soldiers in the last row turned around and fired back at the crowd.

“No one could stop them. They shot their way [into Tiananmen Square],” Wang said.

Wang then ran over to the first victim. He cried as he spoke of him: “He was really a hero of June 4. But no one knew about it.”

After seven or eight signal flares were fired, flares then were also fired near the gate tower of Dongzhimen, and soon after throughout Beijing, Wang said.

“I have reason to believe that the first gunshot of June 4 was fired from here because that’s the place where the first signal flares were fired,” he said.