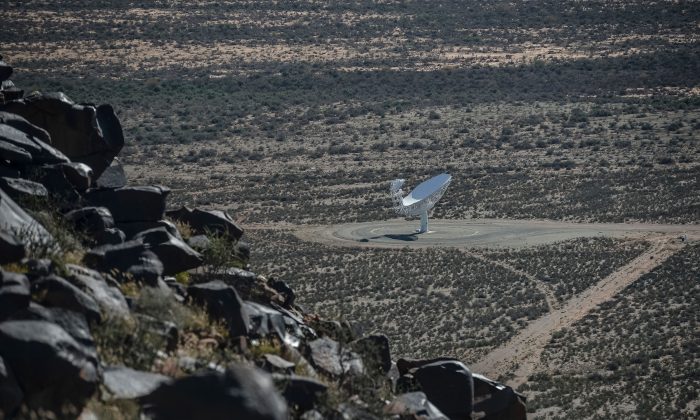 One of the dishes forming South Africa's MeerKAT radio telescope is seen in Carnarvon. It showed off its phenomenal power on July 16th, 2016, revealing 1,300 galaxies in a tiny corner of the universe where only 70 were known before. (MUJAHID SAFODIEN/AFP/Getty Images)
Africa

Even operating at a quarter of its eventual capacity, South Africa’s MeerKAT radio telescope showed off its phenomenal power on July 16th, revealing 1,300 galaxies in a tiny corner of the universe where only 70 were known before.

The image released on Saturday was the first from MeerKAT, where 16 dishes were formally commissioned the same day.

MeerKAT’s full contingent of 64 receptors will be integrated next year into a multi-nation Square Kilometre Array (SKA), which is set to become the world’s most powerful radio telescope.

The images produced by MeerKAT “are far better that we could have expected”, the chief scientist of the SKA in South Africa, Fernando Camilo said at the site of the dishes near the small town of Carnarvon, 600 kilometres north of Cape Town.

This “means that this telescope as is today, only one quarter of the way down (to its full contingent) is already the best radio telescope in the southern hemisphere,” Camilo told AFP.

When fully up and running in the 2020s, the SKA will comprise a forest of 3,000 dishes spread over an area of a square kilometre (0.4 square miles) across remote terrain, allowing astronomers to peer deeper into space in unparalleled detail.

It will have a discovery potential 10,000 times greater than the most advanced modern instruments and will explore exploding stars, black holes, dark energy, and traces of the universe’s origins some 14 billion years ago.

MeerKAT is being built in the remote and arid southwest of the Karoo region of South Africa that offers prime conditions for astronomers.

It will serve as one of the two main clusters of SKA. The other will be in Australia.

Some 200 scientists, engineers, and technicians working in collaboration with industry, local, and foreign universities have developed the technologies, hardware, and software systems for MeerKAT.

South African Minister of Science and Technology Naledi Pandor told AFP that “this the first time that an African group of countries will host global science infrastructure of this character”.

“We can now expect when the 64 dishes are in place next year, it will be the best telescope, not only in the southern hemisphere but in the world,” said Pandor.

More than 20 countries are members of the SKA, including Britain which hosts the headquarters of the project.

The Experiments Trying to Crack Physics’ ‘Biggest’ Question: What Is Dark Energy?

Despite its slowing economy, South Africa, which hosts the bulk of the SKA project, has so far invested 3 billion rands (£159 million) into the telescope project, funded mainly from the public purse and science research partners.

Already some 500 scientific groups from 45 countries have booked slots to use the MeerKAT array between next year and 2022.

“What this will do is bring to South African and world astronomers, the most astonishing and profoundly powerful instrument ever used before in radio astronomy,” SKA South Africa project director Rob Adam told AFP.