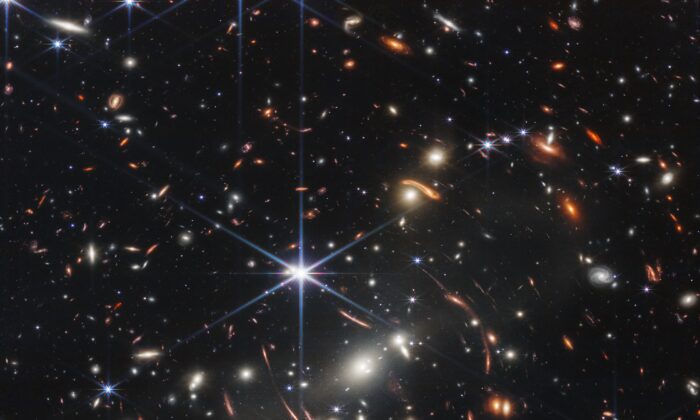 NASA chief Bill Nelson and U.S. President Joe Biden on Monday released the first image from the new James Webb Space Telescope showing a cluster of thousands of galaxies known as SMACS 0723 in “overflowing detail” as they existed billions years ago.

“This is the oldest documented light in the history of the universe from 13 billion—let me say that again, 13 billion—years ago,” Biden said.

The image is called Webb’s First Deep Field and is the “deepest and sharpest” infrared image of the distant universe to date. It is a composite made from images taken at different wavelengths exceeding the Hubble Space Telescope’s deepest fields.

The president and Vice President Kamala Harris, who chairs the National Space Council, were briefed by officials from NASA and Space Telescope Science Institute on Monday, when they previewed the images.

“Thousands of galaxies—including the faintest objects ever observed in the infrared—have appeared in Webb’s view for the first time,” NASA said in a release.

“This slice of the vast universe covers a patch of sky approximately the size of a grain of sand held at arm’s length by someone on the ground.”

A full set of images will be released over the coming days. The image will include an exoplanet outside our solar system, “stellar nurseries” where stars form, galaxies that interact and trigger star formation, and black holes, and a glimpse into how stars die, according to the White House.

‘Just One Little Speck of the Universe’

NASA Administrator Bill Nelson told Biden that if he held one grain of sand at arms length, “that is the part of the universe that you’re seeing” in the image.

“Just one little speck of the universe,” he added.

Nelson said the image showed how the light from some galaxies was bent around other galaxies.

He noted that 100 years ago, scientists thought there was only one galaxy but now they know there are countless billions.

“We’re getting our first glimpse—as you said, Mr. President—we’re looking back more than 13 billion years. Light travels at 186,000 miles per second, and that light that you’re seeing on one of those little specks has been traveling for over 13 billion years,” he said.

Nelson also declared that the telescope will be “so precise” that scientists will be able to see from the “chemical composition” of planets if they are habitable—eliciting a “whoa” from Biden.

“We are going to be able to answer questions that we don’t even know what the questions are yet,” Nelson said.

The Webb Space Telescope was launched from French Guiana in December 2021 and is now orbiting the Sun one million miles away from Earth at what is known as the second Lagrange point—a point of high gravitational stability that helps objects maintain their orbit. The Earth’s orbit is approximately 93 million miles from the Sun.

NASA will release the full set of Webb’s first full-color images and spectroscopic data during a televised broadcast at 10:30 a.m. EDT (14:30 UTC) on July 12 from NASA’s Goddard Space Flight Center in Greenbelt, Maryland.