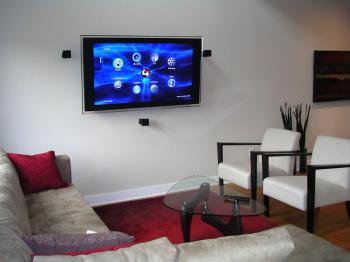 WIRED TO ENTERTAIN: A clean and wire-free home theatre in the Sohowest living room with a wall-mounted LCD TV. All the components are out of sight in the basement and connected to the TV through in-wall wiring. (Cindy Chan/The Epoch Times)
Canada

Mr. Karam wanted the high tech guru to outline a future vision of the Ottawa west-end suburb of Kanata, which at that time had become known as “Silicon Valley North” for its concentration of high tech companies.

”In that report I talked about the fact that people would be working more out of their home, and it was rather a new concept. That’s where the term ‘soho’ came from: ‘small office / home office,’” said Mr. Doyle.

“The concept for which he planted the seed is now being brought to life,” says William Karam, Brian Karam’s son, one of the project’s lead developers.

Sohowest is Ottawa’s first planned future-proof community of its kind where every home is wired with a high-speed fibre optic connection and a complete home network as standard features. Rogers is providing the fibre to deliver high-speed Internet, high-definition TV, and home phone services, all free for the first year.

Every “smart home” in this “Smart Community” model also comes with a turnkey setup that simplifies the technology and makes everything ready to go as soon as the new owner moves in.

And while the high-speed connection will provide people with the same fast Internet service they have in their office, the neighbourhood’s attraction goes far beyond the ability to work from home.

The three features people are most interested in are smart lighting, energy control and management, and multi-room music, says the younger Mr. Karam, who helps put together technology upgrade packages from Best Buy, Geek Squad, and Control4 “to help buyers create their ideal home.”

This week, homebuyers moved into the first of about 1,200 homes that are expected to be built on the 125-acre property over a period of three to five years.

Tabatha Smith and Alastair Luft are among the 50 to 100 new homeowners who will join them in the coming months.

In mid-November, they will move into one of Tartan’s connected singles, a unique design where two or more homes joined together are connected at the garage only, with no common walls between living spaces.

The couple has added on a smart home package that will allow them to play MP3s from their computers and FM radio through in-ceiling speakers throughout the home, including in the patio via two weatherproof outdoor speakers.

“I like entertaining a lot, so being able to play music throughout the entire house and in different rooms as well as out on the patio without having to lug a sound system outside—it’s pretty appealing,” says Ms. Smith.

They will also be able to play music from their iPod through an iPod dock that will distribute the sound throughout their home.

Their living room home theatre will have a wall-mounted LCD TV that’s also visible from the kitchen. The room will be clean and wire free since their DVD player and other components will be out of sight in a cabinet in their finished basement, connected to the TV through in-wall wiring.

Their $12,000 package will also let them control most of the lights in the house. Among the different functions, they can turn off all the lights at once via a remote, dim them to a preset level for movies, and reduce energy usage by ensuring the lights are off when not needed.

Through a simple-to-use interface provided by Control4, they will be able to control all of these functions in their whole house, including their home theatre, from a single remote or an Apple iPod Touch or iPhone.

Mr. Luft says he appreciates “being able to work with Best Buy and the tech team in the development and design stage.”

“It’s nice that we can design it with Tartan and they’ll run wires through the wall so everything is already taken care of. They’ll even coordinate with Best Buy to get it all set up once we move in,” he added.

The price of Sohowest homes ranges from the lower $200,000 to the mid $300,000 range. The core sizes, from 1,700 to 2,200 square feet, are big enough to accommodate small growing families. The homes are attracting not only young families and first- and second-time homebuyers, but downsizing couples as well, says Mr. Karam.

“The technology really resonates with everybody of all ages,” he says, and most buyers are adding technology options.

Meanwhile, although other communities have brought optical fibre to the home, “we’ve gone a step further and brought a business model that helps to support all of [the technology] on a long-term basis.”

The team of companies, including Rogers, Cisco, Best Buy, Geek Squad, Control4, Commscope, and RBC Royal Bank, are “all really big, strong, energetic, the best in their area.”

Along with partnerships with established builders, “this approach also avoids many of the shortcomings of past similar initiatives which did not offer a complete video solution, did not fully integrate with and wire the home, and were not nearly as affordable as our Smart Communities model,” Mr. Karam says.

In addition, the developers put such a high priority on competition and consumer choice that they worked very hard to get Bell to come into the community.

Bell is coming in with copper rather than fibre. Although only Rogers is providing free services for the first year, homeowners can choose to be either a Rogers or a Bell customer or switch back and forth between the two.

Mr. Doyle thinks the collaboration of companies in Sohowest is “tremendous” and may be the precursor to an entirely new industry.

“It’s not easy to pull all of those players together, and maybe there is a need for a new type of service where somebody would pull the Rogers and the Ciscos and everybody together the way Brian has done it, so he may be starting a whole new service industry,” he said.

Adjacent to Sohowest are another 1,100 acres of land that are planned for development.

“Hopefully we will get to influence those so maybe they will be smart communities,” Mr. Karam says.

“We’ve tried to create a working template model to do this in other communities. Our primary concern is making sure that communities and homes are built smarter and greener than they are today.”