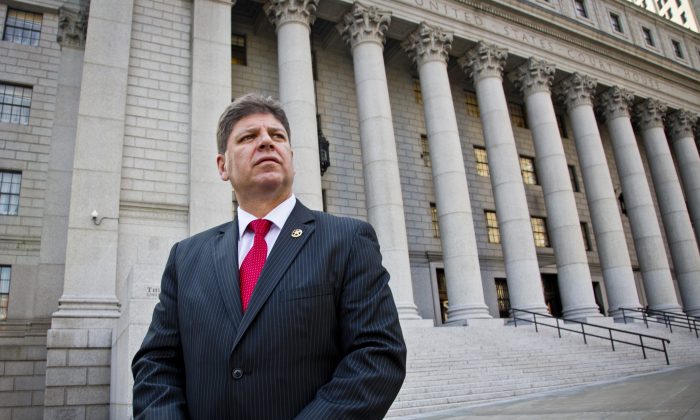 NEW YORK—Long before Michael Greco became the first Hispanic U.S. marshal in the judicial district that includes Manhattan, he dreamed of becoming a police officer, a cowboy, an astronaut and the Pope. Decades later, his wish list has dwindled.

“I’m not getting a call from the Vatican anytime soon. And the whole astronaut thing didn’t work out. I’m not too crazy about heights anyway,” Greco says, smiling recently between sips of green tea in his office in the federal courthouse in Manhattan.

And the police officer and cowboy aspirations?

“Think about it: You combine the two and you have something called the U.S. marshal,” says Greco, who took over the post earlier this year.

The Bronx-born marshal, a motorcycle-riding one-time college football linebacker of Puerto Rican descent, entered the New York State Police Academy in 1982 after a childhood in Rockland County. His first assignment put him on the front lines of the emerging crack epidemic, patrolling major highways in Orange County.

He rose through the ranks, joining a Drug Enforcement Administration task force for eight years before investigating discrimination, including sexual harassment claims, within the State Police for seven years. For the last eight years he was based at New York Police Department headquarters, where he was the state police liaison to the NYPD.

Now, Greco, 55, is one of 94 U.S. marshals nationwide, responsible for the safety of the courts, its employees, including over 100 judges, and a lot more in Manhattan and the Bronx, along with the counties of Rockland, Orange, Sullivan, Westchester, Putnam and Dutchess.

“The Southern District of New York is the crown jewel of the country,” he says. “This is the crossroads of the world here and the eyes are always upon us.”

He leads about 350 deputy marshals, court security officers, special security officers and civilian staff who work for the nation’s oldest law enforcement agency — established in 1789 — by capturing fugitives, transporting prisoners, protecting witnesses and assisting other federal, state and local agencies. He sees his chief responsibility as keeping the courthouses, the judges and his employees safe.

“Security concerns — we eat, sleep, drink it,” he says.

To make sure his agency fits well with others, Greco is meeting hundreds of law enforcement officials in his northern counties in coming weeks, introducing some of his staff and letting them know how deputy marshals can help them track fugitives and sexual predators. It’s all part of a mission he thinks he was built for.

“It really is a dream come true. It’s the icing on the cake of a law enforcement career where I still pinch myself to make sure I’m not dreaming,” he says.

His friends are not surprised.

Retired NYPD Chief Brian Burke recalled that Greco seemed to always show up at the hospital when an officer was shot. He said Greco arranged in the middle of the night to fly two daughters attending upstate colleges home to see their father, Officer Peter Figoski, at a hospital before he died in December 2011. Figoski was shot by a break-in suspect. It was about 2 a.m. when Greco got to work.

“I knew he’d answer the phone,” Burke said. Greco arranged for the women to be flown by helicopter to Albany and then by state police plane to Floyd Bennett Field in Brooklyn so they could race to the hospital.

“What gets guys in trouble is their ego,” says retired NYPD Sgt. Tom Kelly, who has known Greco since they went to grade school together. “He doesn’t have it. He’s just a smart guy who can play in the sand box with anybody.”

Greco proudly recalls his late grandmother’s decision in 1940 to leave Puerto Rico for the states, where one of her daughters would someday work at a hospital with the mother of Sonia Sotomayor, the nation’s first Hispanic Supreme Court justice.

Greco paid tribute to his grandmother, Rosa Maria Cruz Diaz, with his hand on her Bible when he was sworn in last spring.

He’s already been tested when his agency played a role with security in September when the Pope and President Obama came to town as law enforcement worked to protect over 150 heads of state visiting the city for the United Nations General Assembly.

“It was an unprecedented challenge here in New York City,” he says. “And as far as I know, we came out of this without one incident.”