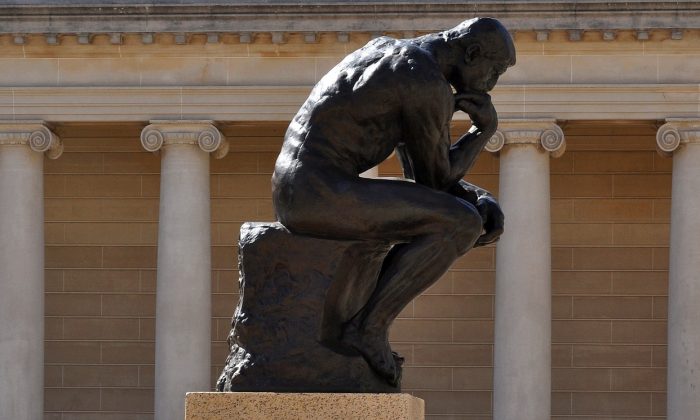 A first grader in the San Francisco Bay area gave an answer to a riddle from his teacher that has the internet thinking about life. (PeterKaul/Pixabay)
US News

A first grader’s response to a riddle his teacher gave him has gotten netizens talking about life after the teacher posted his answer on Twitter.

One student responded with “death.”

“Such an awed, somber, reflective hush fell over the class,” teacher Bret Turner wrote about the students’ reaction to the suggestion.

Turner said he felt bad about giving his students the real “banal” answer after he got a string of other equally profound comments.

“I fielded other guesses that continued along a similarly existential vein,” Turner wrote. “There was ‘NOT everything,’ ‘all stuff,’ ‘the end,’ and maybe my favorite, ‘nothingthing.’”

Turner said that when he finally told the students the correct answer to the riddle, they were “largely unimpressed.”

Despite the answer being right in the tweet, many netizens responded to the riddle with their own guess:

“The correct answer, of course is God.”

“I’m the dark smudge under eternity.”

“The number of people replying to this tweet with “it’s the letter e!” when you LITERALLY STATED THAT IN THE TWEET makes me despair,” one person commented.

The student’s answer of “death” also sparked a conversation about the child’s mental health, with one person suggesting the child needed therapy if he was thinking about something like that at such a young age.

“When I was 6, I would have said bunnies, or the Virgin Mary, or something else warm and fuzzy,” the Twitter user wrote.

Several people came to the child’s defense, saying things like:

“I grew up on a farm with great grandparents, grandparents, parents & siblings–all sorts of animals, woods, crops. People & things die–you know that almost from the start, so it’s not something hidden or pathological,” one Twitter user wrote.

Turner told USA TODAY it’s not unusual for his students to talk about death.

“Young kids talk about death all the time; grandparents, relatives, especially pets,” he said. “It’s fascinating to them, and also normal.”

Turner said he considered telling his students about the popularity of his tweet.

“Given their facility with the internets,” he wrote, “I expect their response will be ‘sure but did it go SUPERviral’ and ‘just how many retweets are we talking about here’ and ‘can I go to the bathroom.’

The first guess from one of my 1st graders was “death” and such an awed, somber, reflective hush fell over the class that I didn’t want to tell them that actually the answer is the letter e, which just seemed so banal in the moment pic.twitter.com/7sYFxHNcZk

I’m considering telling the kids tomorrow that a tweet about them went viral, and given their facility with the internets, I expect their response will be “sure but did it go SUPERviral” and “just how many retweets are we talking about here” and “can I go to the bathroom”