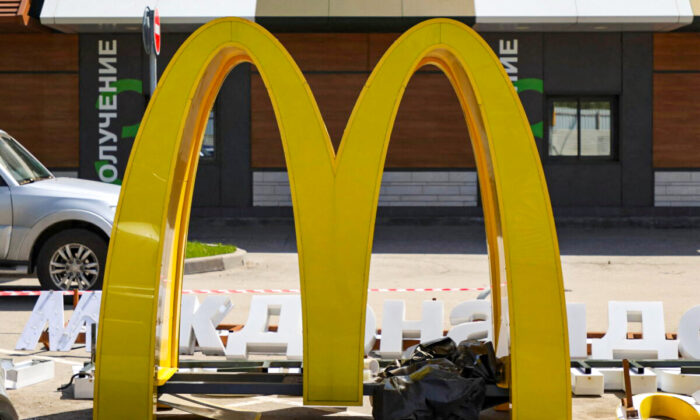 The dismantled McDonald's Golden Arches after the logo signage was removed from a drive-through restaurant of McDonald's in Khimki outside Moscow, Russia on May 23, 2022. (Lev Sergeev/Reuters)
Companies

McDonald’s removed its signature “Golden Arches” sign from one of its locations near Moscow on Monday following an earlier announcement that it was withdrawing from the Russian market as a consequence of the country’s invasion of Ukraine.

The fast-food giant removed its sign from a McDonald’s location in Khimki, a Russian city several miles north of Moscow, beginning a process that will occur at McDonald’s restaurants across the country after over 30 years of serving Russian customers.

In March, McDonald’s announced it would temporarily suspend its operations within the Russian Federation after facing public opposition to its continued involvement in the nation helmed by President Vladimir Putin. Shortly thereafter, the void began to be filled by local knockoffs such as “Uncle Vanya,” a McDonald’s imitator which rotated the company’s “Golden Arches” logo to form the Cyrillic character “В.”

Earlier this month, the company announced that it would permanently close its Russian locations, citing financial, legal, and humanitarian concerns in the midst of the ongoing Ukraine war.

“For the first time in our history, we are ‘de-Arching’ a major market and selling our portfolio of McDonald’s restaurants,” McDonald’s executive Chris Kempczinski said at the time of the announcement. “They will no longer carry the McDonald’s name or serve our menu. The Golden Arches will shine no more in Russia.”

McDonald’s properties in Russia are to be sold to a local licensee, who will rebrand the restaurants with a new name which has not yet been announced.

The departure of McDonald’s from the preeminent Slavic nation has been identified as a symbolically significant shift in relations between Western corporations and Russian markets. The opening of the first Russian McDonald’s location in Pushkin Square in 1990 was seen as a symbol of the country’s integration within global, U.S.-led capitalism in the dying days of the Soviet Union, heralding a new future for Russia after communism.

The franchise expanded into the People’s Republic of China that same year, with McDonald’s opening its first mainland Chinese location in Shenzhen in the fall of 1990. While the company has withdrawn from Russia in protest of the Ukraine war, it has announced no plans to withdraw from communist China, even despite the country’s totalitarian regime and persecution of ethnic and religious minorities.

While the Chinese state’s severe lockdowns may cause trepidation among Western businesses seeking to do business in the country, McDonald’s maintains over 3,700 locations in mainland China, even converting the former residence of Kuomintang leader Chiang Ching-kuo into a McDonald’s location.

For Russia, the withdrawal of McDonald’s can be interpreted as a reversal of the putative steps toward the West made after the collapse of the USSR. While a return to a planned economy such as that of the Soviet Union has not materialized, neither has the integration of Russia within the economic axis of North America and Western Europe.

The un-branded McDonald’s in Khimki is a stark reminder of Russia’s growing isolation from the world economy, as Putin’s irredentism drives businesses away from Russian markets.