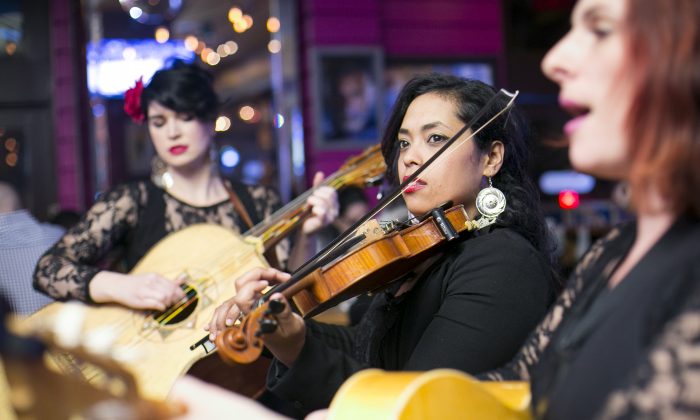 NEW YORK—”You guys aren’t Mexican!” is a comment that the members of Mariachi Flor de Toloache often hear after a lively performance. That is not entirely true. One of the 13 members is Mexican, another is half, while the rest vary from Colombian, to Australian, to an African-American from St. Louis.

“Why is that the first thing you say?” Mireya Ramos, founder of the band, would respond. “Why not comment on how we sound?”

Mariachi, a type of folk music that originates from rural Mexico, is traditionally performed by Mexicans, particularly Mexican men. From the steel Botonadura buttons to the brilliant blows from trumpeters, a masculine mood pervades.

Yet for the up-and-coming band Mariachi Flor de Toloache, the lead vocalists are diverse women with soulful, throaty voices. In fact, every member of the band is a woman.

“There’s been some famous female singers that fronted mariachi bands, but the band is always male,” said Walter Little, president of the Society for Latin American and Caribbean Anthropology. “An all female band is pretty distinctive.”

Mariachi Flor de Toloache is the first mariachi band of its kind in New York City. Its members are all female and multicultural, and many have degrees in music. Since its founding in 2008, the band has grown increasingly popular. They perform up to 10 shows a week.

Yet its success may be tied to something more than good music.

Recently, when the U.S. Department of Homeland Security was nearly shut down due to divisions on the polarizing issue of immigration, a band like Mariachi Flor de Toloache is a soft reminder of a feasible unity between cultures.

“They’re a nice embodiment of what the U.S. can be like,” Little said.

Impressed by the diversity of the group, the U.S. Department of State hired Mariachi Flor de Toloache to perform in India during an initiative to improve bilateral relations through cultural exchanges in 2013.

The band toured and visited girls’ schools. “We showed them that they can make a career out of whatever they want,” said Jackie Coleman, who plays trumpet in the band.

They performed in six cities, including New Delhi.

“The audiences embraced this multicultural group and their diverse backgrounds,” said Rachel Sunden, the deputy director of the American Center in Kolkata, a part of the Consulate General of the United States, in a statement.

A Longing for Female Mariachi Voices

Diners clap to the scintillating rhythm and some get up to dance. With a playful yelp and leap, Ramos leads her band members, adorned in lace-laden black shirts and dangling metal earrings, around the Campeón restaurant near Union Square. The band has held residency there since August.

She looks like she has performed Mariachi her whole life, but that is not the case.

Ramos played with a male mariachi band in New York prior to founding Mariachi Flor de Toloache. But she grew tired of the cultural and gender frictions that arose from a “very macho” band, she said.

She was not the only one who felt this was a problem.

“From what I hear here in Chiapas, [Mexico] whether on the radio in the taxi, in shops, in public events, all the songs talk about love and romance and alcohol … from a male point of view …” Mounia El Kotni, a SUNY Anthropology doctoral candidate wrote in an email. She is currently conducting doctoral dissertation fieldwork related to gender in Mexico.

A need to create a platform for a feminine interpretation of mariachi is one of the reasons why Ramos founded this group.

That’s not to say they’re the first female mariachi singers.

Ramos grew up in Puerto Rico, where her father owned a Mexican restaurant near the Condado Beach. He’d take breaks from cooking by performing mariachi to his customers.

She recalled how he went from table to table, and remembered the look on the diners’ faces when he performed his mariachi music.

Although Ramos sang and played violin as a child, she never sang mariachi. It was rare for girls to do so.

When she heard mariachi in New York many years later, she decided to start a female band.

The songs that Mariachi Flor de Toloache play are an original mix of R&B, jazz, pop, salsa, and mariachi. They will debut their first album on April 4.

Their novelty allows them to play at venues that traditionally do not book mariachi bands—such as Nublu, which ordinarily focuses on jazz music.

“Most of the venues we perform at have never had mariachi performers before,” said Shae Fiol, one of the vocalists. “It starts a conversation.”