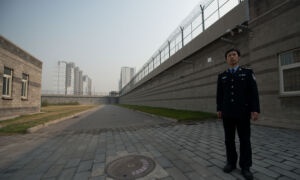 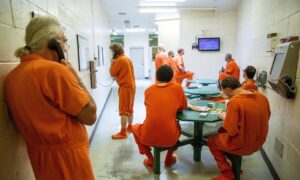 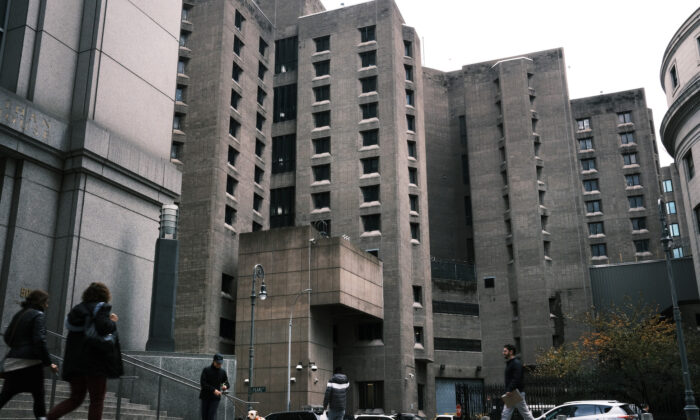 The Metropolitan Correctional Center, which is operated by the Federal Bureau of Prisons, stands in lower Manhattan in New York City on Nov. 19, 2019. (Spencer Platt/Getty Images)
AMERICA

A 47-year-old inmate in Louisiana has become the first to die from COVID-19 in a federal prison, officials announced over the weekend.

The Federal Bureau of Prisons reported that 19 inmates and 19 staff have currently tested positive across the federal prison system, with five of those inmates at the low-security Louisiana prison where the inmate died on Saturday.

Inmate Patrick Jones had a preexisting condition listed as a risk factor. He complained of a cough on March 19 to staff at the federal correction institution in Oakdale, Louisiana, where he was three years into a 27-year sentence.

On March 20 he was put on a ventilator after testing positive.

According to an FBO statement (pdf), “On Saturday, March 28, 2020, Mr. Jones, who had long-term, preexisting medical conditions which the CDC lists as risk factors for developing more severe COVID-19 disease, was pronounced dead by hospital staff.”

Oakdale prison is a low-security facility that houses 990 male offenders.

Some state prisons have already temporarily released prisoners serving time for less serious crimes, as they brace for the growing number of cases of CCP virus, commonly referred to as the novel coronavirus.

The Epoch Times refers to the virus, which causes the disease COVID-19, as the CCP virus because the regime’s coverup and mismanagement allowed the virus to spread throughout China and fan a global pandemic.

According to Reuters, at least 132 inmates and 104 staff at jails across New York City on Saturday had tested positive for the virus.

Last week, authorities announced they would be releasing 300 nonviolent inmates.

In California, another hotspot for the virus, Los Angeles County has released 1,700 inmates, or about one out of every 10 inmates, in response to the CCP virus.

All of the inmates had fewer than 30 days left on their sentences and were in jail because of nonviolent misdemeanors.

The majority of America’s prison population of over 2 million is housed in state prisons. There are currently just over 175,000 inmates held in federal prisons.

Attorney General William Barr said on Thursday that he had directed the Bureau of Prisons to assess whether it was possible to expand home confinement “particularly for those older prisoners who have served substantial parts of their sentence and no longer pose a threat and may have underlying conditions that make them particularly vulnerable.”

“We have authorities under the First Step Act and under other general authorities … will permit us to release to home confinement for certain designated circumstances,” Barr said during an unrelated press conference. “And I’ve asked and issued a memorandum just today to the Bureau of Prisons to increase the use of home confinement based on a number of factors.”