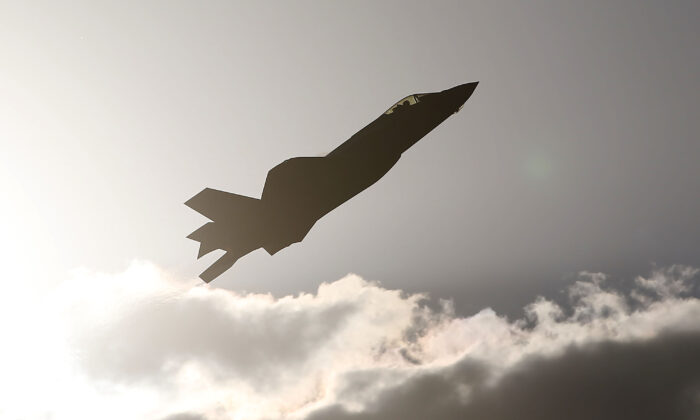 Fighter Jet the F-35A lightning flies across at Avalon Airport on March 01, 2019 in Melbourne, Australia.(Photo by Michael Dodge/Getty Images)
Australia

The first four of a new squadron of F-35A Lightning ll fighter jets landed at RAAF Base Tindal in the Northern Territory on Thursday.

The new fighters will be permanently based in the Territory and replace the ageing F/A-18A/B Classic Hornets that have been in operation for 33 years.

This comes as part of the Morrison government’s ongoing investment in the Tindal base to boost the Australian Defence Force’s capacity to defend Australia’s interests, as well as strengthen the nation’s Air Force capabilities in the Indo-Pacific, which includes India, Japan, Vietnam, Taiwan, Indonesia, and New Zealand.

Defence Minister Peter Dutton said that the No.75 Squadron, which had previously operated the Classic Hornet aircraft, would operate the new multi-role fighter jets from the Top End because it is a strategically important location for national defence and regional engagement.

“By the time the Air Force is scheduled to declare F-35A Final Operational Capability in December 2023, sixteen of the fifth-generation multi-role fighters will be based at Tindal, and they will be well practised at operating with our partners in the region,” he said.

“The F-35A-equipped 75 Squadron will capitalise on frequent opportunities to bolster interoperability with U.S. rotational aircraft deployments and other Enhanced Air Cooperation activities that will take place in the Top End as announced at this year’s AUSMIN.”

AUSMIN stands for “Australia-United States Ministerial Consultations”, and is the primary forum for bilateral consultations with the U.S. These consultations are held regularly both in the U.S. and Australia, providing opportunities to discuss perspectives and approaches on regional and global issues in order to deepen bilateral foreign security and defence cooperation.

According to airforce.gov.au, some key features of the F-35A are a low observable design, internal weapons and fuel carriage, advanced radar, electro-optical infrared sensors, advanced voice and data link communications, and the ability to employ a wide range of air-to-surface and air-to-air weapons.

Global security and aerospace company, Lockheed Martin, will assist with aircraft maintenance at the Tindal base, while F135 engine manufacturer, Pratt & Whitney, will help Defence to ensure the base is set up for the long term engine maintenance.

Along with the Tindal base, F-35A fighter jets will also be operating from RAAF Base Williamtown near Newcastle in NSW, and Australia has committed to 72 of the aircraft utilised across both bases, all of which should be fully operational by 2023.