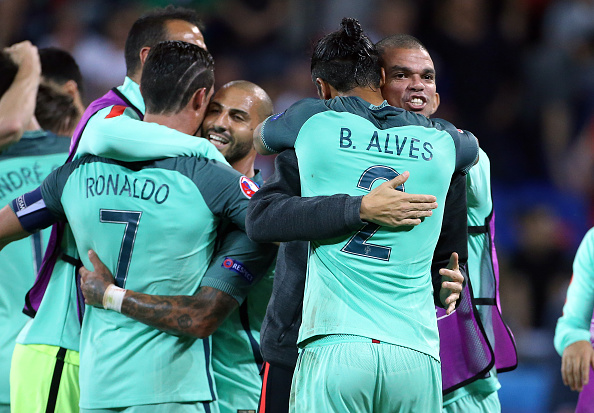 The first semi-final of Euro 2016 championship took place on Wednesday night July 6 in Lyon with Wales facing Portugal, pitting 2 sides both led by Real Madrid ‘galacticos’ in a clash of styles.

Gareth Bale embracing Wales’ team ethic and applauding all efforts by his team mates, and Cristiano Ronaldo dominating all of Portugal’s moves and scoring chances.

After a very cagey first half where neither Portugal nor Wales really posed much of an offensive threat, and the only work for either goalkeeper came from a regulation save from a shot from the edge of the box, the match was effectively settled during a three minute spell five minutes into the second half.

Initially, Portugal won a needless central free kick fifteen yards into the Welsh half where ball was delivered into the box and headed out for a corner by Andy King. From the 50th minute left wing corner, the Welsh defence had a lapse of concentration where a mismatch led to Cristiano Ronaldo rising and outjumping James Chester at the far post and powering a fine header past Wayne Hennessey and into the net for the lead.

Unfortunately for Wales, they quickly gave away possession after the resulting kick off, and Portugal worked the ball down the left wing. From there the ball was played towards the edge of the box, where the ball fell to an unmarked Ronaldo 20 yards out in line with the right hand post, with the Welsh defenders caught on their heels on the edge of the 6 yard box. Ronaldo failed to strike his 53rd minute shot correctly. Instead of testing Hennessy, he drove it towards the centre edge of the 6 yard box where Nani, in front of Welsh captain Ashley Williams, with James Collins watching on, turned the ball past goalkeeper Hennessey.

With Wales now forced to chase the game, manager Chris Coleman made 3 quick substitutions replacing Ledley, Collins and King, and bringing on Vokes, Williams and Church, changing the structure, and exposing their defence by committing players forward.

However, Wales failed to create any clear chances, and failed to expose the older Portuguese central defenders, leaving the main threat to long range efforts from Gareth Bale, which were comfortably dealt with by the goalkeeper Rui Patricio.

Although Portugal then really looked to play out the game by playing safe from then on,

Wales left themselves exposed to the counter attack where Renato Sanches, Ricardo Quaresma and other players looked to create goal threats.

Apart from a few chances that fell to Ronaldo, who rarely tested the goalkeeper, Wales were lucky to escape a third goal in the 78th minute when Hennessey recovered to stop the ball from crossing the goal line after Denilo’s original shot had escaped his grasp.

Portugal, although possessing a talented squad and team, this was their first win in regulation time during this tournament, will need to raise their game to threaten the winner of the second semi-final on Thursday evening in .

Germany look to be the team to beat after eliminating their major tournament nemesis, Italy, on penalties, whilst France hope to continue their confident form from the elimination of the tournament’s surprise team, Iceland, 5-2 in their quarter-final.

Despite losing players such as Mario Gomez, Germany look to be the likely winners unless France can solve their formation and selection conundrum, and progress as the team most likely to prevail in Sunday’s final at Stade de France, Saint-Denis, Paris.

Germany retain the bulk of their players from their 2014 Wold Cup win in Brazil, whilst France contain an experienced side with a few exceptional talents such as Pogba, Payet and Griezmann that coach Didier Deschamps appears to have moulded into a competitive playing unit.