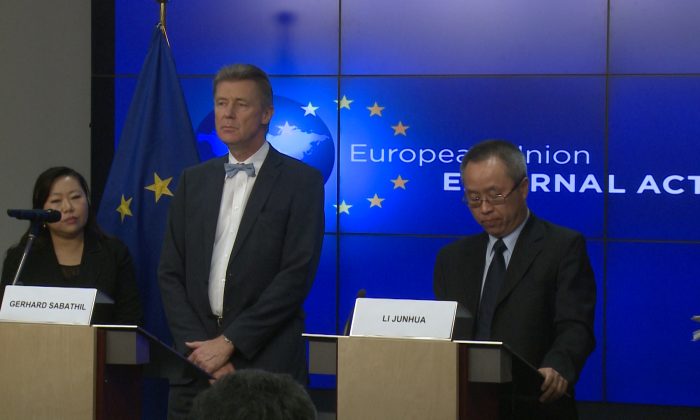 Gerhard Sabathil (L), director for East Asia and the Pacific in the European External Action Service (EEAS) and Li Junhua, director general for International Organizations and Conferences, Ministry of Foreign Affairs of the People's Republic of China hold a joint press conference after the 33rd human rights dialogue at the headquarters of the EEAS in Brussels on Dec. 8, 2014.
Europe

BRUSSELS—The EU and China held their 33rd human rights dialogue on Monday, an event that happens on a bi-annual basis. What was different this time, however, is that the closed-door discussions were followed by a press-conference where media were allowed to ask questions.

“It is the first time we have a press conference because we both feel accountable to the public, to the media, to the European Parliamentarians, to both China and EU,” said Gerhard Sabathil, director for East Asia and the Pacific in the European External Action Service and the representative for the EU in the dialogue.

When asked what issues the EU raised with China, Sabathil said there were many.

When asked about Hong Kong, Sabathil confirmed the issue was raised. Li Junhua from the Ministry of Foreign Affairs of the People’s Republic of China, insisted it was an issue of law, not human rights as he deemed the protests “illegal.”

An EU official later confirmed that the issue of forced organ removal from prisoners on death row and prisoners of conscience was also raised.

The EU Parliament passed a resolution on Dec. 12 last year that called for an immediate stop to this practice and called for a full EU and UN investigation into the matter.

In the resolution, the EU expressed its “deep concern over the persistent and credible reports of systematic, state-sanctioned organ harvesting from non-consenting prisoners of conscience in the People’s Republic of China, including from large numbers of Falun Gong practitioners imprisoned for their religious beliefs, as well as from members of other religious and ethnic minority groups,” calling it an “egregious and intolerable violation of the fundamental right to life.”

Li said the EU and China shared similar views in some areas, and disagreed in others. One thing they disagreed on was the definition of human rights.

Reporters Without Borders ranks China 175 out of 180 countries, for freedom of the press and Amnesty International calls China an “authoritarian state” as does the U.S. State Department.

Director of the Asia and China Program at the European Council on Foreign Relation’s (ECFR), François Godement, wrote a commentary on Monday chastising the EU for not being more outspoken with China on its poor human rights record.

“European leaders have at best tried to separate economics from politics and at worst have stayed silent on human rights to help attract Chinese lending and investment,” said Godement in a commentary on the ECFR website.