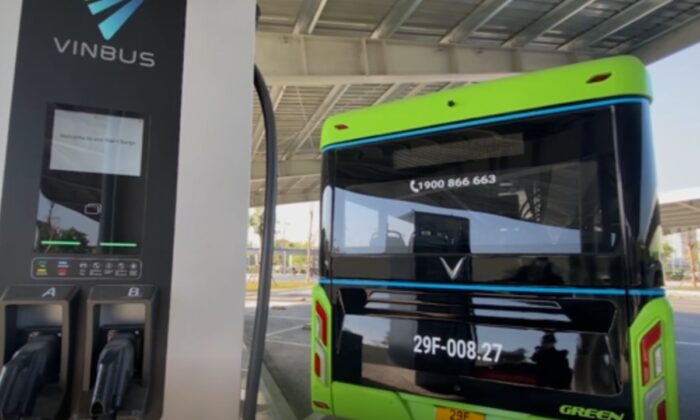 An electric bus parks next to a charging post in Hanoi, Vietnam, on Dec. 2, 2021, in a still from video. (AP/Screenshot via The Epoch Times)
Tech News

Vietnam’s first electric buses were manufactured and assembled by VinBus and have the capacity to carry up to 68 people and drive between 220 and 260 kilometers per power charge.

They launched on the streets of the capital Hanoi on Dec. 2.

“The electric buses will connect the city’s main destinations and populated areas. It will be integrated into the city’s public transportation network to diversify and give more traveling options to commuters. After the launch phase we will reassess the extension of the operation,” explains Deputy General Director of VinBus Nguyen Van Thanh.

The bus is also equipped with an automatic system that can assess the drivers and warn of dangers when it detects things such as fatigue or sleepiness.

Phone charger ports and Wi-Fi are also available for passengers.

VinBus will initially offer three routes during the opening phase, Vinbus plans to open 6 more routes in 2022 and aims for further extension in the future.

Public transport is a challenge to Hanoi, a city of over 8 million. People mainly use private transportation as the city’s bus network is scattered and poorly connected.