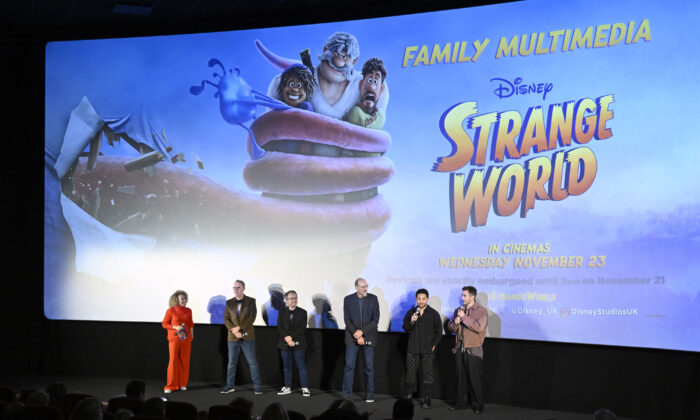 The cast of "Strange World" attends a multimedia event at Picturehouse Central on Nov. 19, 2022 in London, England. (Gareth Cattermole/Getty Images)
By Jackson Elliott

Disney’s first animated film featuring a teen homosexual romance fell far short of expectations at the box office, bringing in under $20 million in tickets sold in its first five days in theaters, according to Nash Information Services.

“Strange World” is the latest product for a company that has not been shy about its commitment to progressive ideology. According to a survey by the American Conservative Values ETF (ACVF), an investment advisory service, conservatives now rate Disney as the “most woke or liberal” company in America.

Released on Nov. 23, the animated science-fiction adventure includes a teenage boy named Ethan who has same-sex desires. Ethan is one of the main characters, and his sexuality is a minor plot point in the movie, which mostly focuses on the connection between fathers and sons.

Jaboukie Young-White, the homosexual actor who voices Ethan’s character, said that Ethan’s desire is special because it blends into the background.

“This isn’t a coming-out story, and it’s not him looking for acceptance of his identity. That’s just who he is, and it’s not underlined or made to be a big deal,” Young-White said in an interview on Twitter.

“It’s an aspect of Ethan and one of the many things that makes him who he is. I thought that was amazing.”

Ethan joins the slew of 17 LGBT characters taking an ever-increasing role in the company’s films.

Disney wasn’t always perceived as extremely liberal. In December 2021, only 10 percent of surveyed conservative investors with ACVF voted that Disney was woke. Now, about 5o percent do.

In a video released in March by Christopher Rufo, Disney executive producer Latoya Raveneau said the company had a “not-at-all-secret gay agenda.”

They include a pair of arguing antelopes in “Zootopia,” two women in “Finding Dory,” and a pair of women with a child in “Toy Story 4.”

But those characters appeared onscreen for mere moments, and sometimes could be passed off as “whatever you want them to be,” “Finding Dory” producer Lindsey Collins said on Twitter.

“Zootopia” screenwriter Jared Bush later confirmed on Twitter that the male antelopes were in a sexual relationship.

Since then, Disney movies have made homosexual relationships more obvious.

In Disney’s live-action “Beauty and the Beast,” the character LeFou makes clear his attraction to men.

In “Thor: Ragnarok,” Valkyrie is portrayed as bisexual. “Avengers: Endgame” featured an unnamed homosexual man talking about dating another man.

Disney hasn’t limited its focus on non-family friendly content to its movies. On Aug. 22, Disney+ announced the release of “Welcome to Chippendales,” a true-crime drama based on the creation of a popular male stripper tour group that helped make strip clubs mainstream.

The show’s Disney+ trailer on YouTube shows women shoving money down the pants of a male stripper and a row of male strippers ripping off their clothes to reveal thongs.

Ethan’s may be the most prominent same-sex Disney romance yet. He’s the first supporting protagonist with an on-screen homosexual attraction. But even his non-heterosexual romance only takes a few scenes.

The choice to keep the gay romance both plot-essential and offscreen may reflect an understanding of a recent psychological study.

When straight men see gay men kiss, they have the same physiological stress response as they do when seeing rotting food or maggots, according to a study published by the scientific journal “Psychology and Sexuality.”

In the study, even straight men who approved of homosexuality had this reaction.

United States Parents Involved in Education (USPIE), a conservative group, argues that the inclusion of homosexual characters in movies for children is a form of sexual grooming.

“Young impressionable kids are being sexualized through movies like these. They are being robbed of their innocence during a time when puberty is already confusing enough. Most kids aren’t even thinking about sex at the age targeted by this movie,” the group’s president, Sheri Few, told The Epoch Times in an email.

“Disney is no longer a family-friendly media company. Families are boycotting their theme parks and their earnings have plummeted along with their stocks. This shows their LGBT agenda is not reflective of most Americans who do not believe children should be sexualized,” Few said.

Few suggested that parents preview shows before letting their children watch them.

The Gay and Lesbian Alliance Against Defamation (GLAAD) has accused Disney of having the “weakest history” on LGBT inclusion of all major movie studios.

“LGBT people are part of the world that young people know—whether being LGBT themselves, having LGBT friends, or being the child of queer parents. Films that are meant to address this audience must reflect that and include LGBT characters and stories,” GLAAD’s website reads.

In the past, Disney has bowed to demands from socially conservative foreign governments, changing movies to please international audiences. In the Russian, Arab, and African versions of “Lightyear,” “Onward,” and “Eternals,” lesbian kisses and LGBT characters disappeared or were reinterpreted, according to the Daily Mail.

In the case of “Strange World,” Disney chose not to cut the movie’s LGBT scenes for foreign audiences, Deadline reported.

It’s unclear just how much Disney’s choices to press LGBT ideology will affect its bottom line.

But conservative parents seem to dislike having their children introduced to radical gender ideology. Some conservative groups, including Moms for Liberty, have voted to boycott the company.

Disney did not respond to a request for comment.