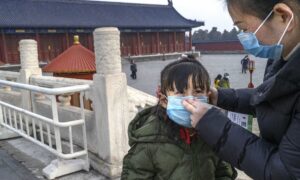 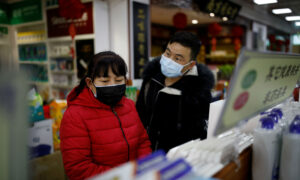 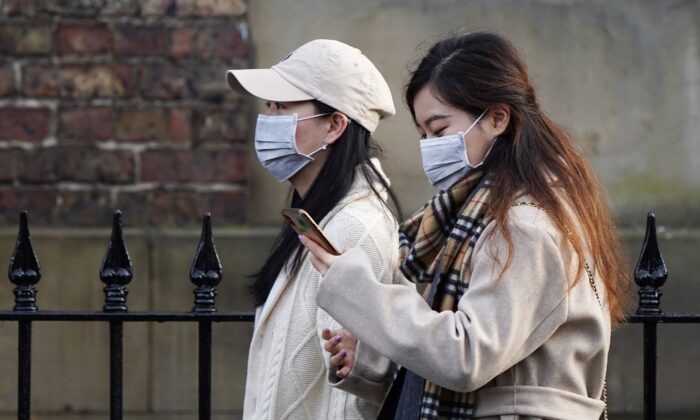 Two women wearing face masks walk through the city center near to the Royal Victoria Infirmary where two patients who have tested positive for the Wuhan coronavirus are being treated by specialist medical workers in Newcastle, England, on Jan. 31, 2020. (Ian Forsyth/Getty Images)
Coronavirus Outbreak

Authorities in the United Kingdom, Russia, and Italy said patients tested positive for the Novel Coronavirus, the first confirmed cases in the countries.

England’s Department of Health and Social Care said in a statement on Friday that there are two confirmed cases of the coronavirus in the country.

Both patients were transferred to a specialist infection unit in Newcastle.

“We are using tried and tested infection control procedures to prevent further spread of the virus,” England’s Chief Medical Officer Chris Whitty said in a statement.

Medical workers are “working rapidly to identify any contacts the patients had” to try to prevent further spread of the new virus, Whitty added.

The chief medical officers in the UK raised the coronavirus risk level from “low” to “moderate,” saying in a statement: “This does not mean we think the risk to individuals in the U.K. has changed at this stage, but that government should plan for all eventualities.”

The tourists are a husband and wife, AFP reported. They were isolated at the Spallanzani infectious diseases institute in Italy’s capital.

“I’m confident that the situation will remain contained,” Conte said.

The Italian government said it was instituting a travel ban, forcing the cancellation of all flights between Italy and China, and declaring a state of emergency.

“We think we are the first EU country to take this precautionary measure,” Conte said.

Russian Deputy Prime Minister Tatyana Golikova said that the two patients are both Chinese citizens. They’re in the Trans-Baikal Region and the Tyumen Region.

“They are under strict surveillance. They have been isolated, and necessary assistance has been provided to them,” she said. Russia was planning to evacuate its citizens from Hubei Province, Golikova said at a press conference, and would cancel all flights by Russian carriers between Russia and China. Four Chinese airlines would be allowed to continue flying into Moscow.

Russia closed its land border with China on Thursday.

Coronaviruses are a large family of viruses that are common in many different species of animals and can, in rare cases, infect people. The origin of the new coronavirus isn’t known. The new virus is spreading between humans now, multiple countries, including the United States and Germany.

Person-to-person spread of two previous coronaviruses, MERS and SARS, likely took place mainly via respiratory droplets produced when an infected person coughs or sneezes, similar to how influenza and other respiratory pathogens spread, according to the U.S. Centers for Disease Control and Prevention.

The new coronavirus started in Wuhan in December 2019 and has since spread to every region in China as well as some 20 countries around the world. Cases have been confirmed in the Americas, Europe, the Middle East, Asia, and Oceania.

People seeking to prevent the virus, which has no vaccine and no known cure, should wash their hands often or use hand sanitizer if soap isn’t available; avoid touching their eyes, nose, and mouths with unwashed hands, and avoid close contact with people who are sick.