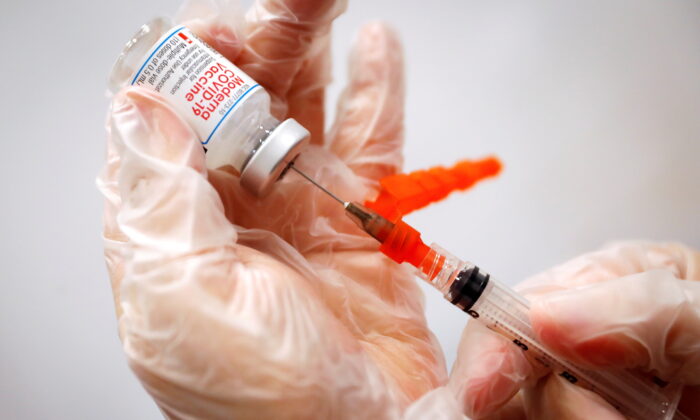 A healthcare worker prepares a syringe with the Moderna COVID-19 vaccine at a vaccination site in New York City on Jan. 29, 2021. (Mike Segar/Reuters)
Australia

The first batch of one million Moderna vaccine doses will arrive in Sydney on Friday night, followed by a second shipment due on the weekend, before being distributed to states and territories next week.

Health Minister Greg Hunt said 1,800 pharmacies will begin to administer Moderna vaccines to people from next week while 4,500 GPs would be involved from the following week.

Workplace vaccination programs will also administer Moderna although they are primarily expected to use Pfizer.

“These are very important because they simply provide not only more vaccines, but more points of access for Australians everywhere,” the health minister told reporters on Friday. “There is sufficient vaccine for every Australian before the end of October, if not slightly earlier.”

The Therapeutic Goods Administration will test each batch as they arrive, with Hunt noting that more supply is due in the weeks ahead.

Australia has an agreement for 25 million Moderna doses including 10 million of the current vaccines and 15 million booster shots.

It will be primarily available in pharmacies across Australia with all people aged 12 to 59 eligible for the two-dose course.

A gap of four to six weeks between doses is recommended.

Like Pfizer, Moderna is a messenger RNA (mRNA) vaccine that uses a genetic code called RNA to instruct the body to produce the novel coronavirus’ specific spike protein.

“Once the mRNA enters the body’s cells, the cells use the instructions contained in the RNA to make the spike protein. Immune cells then recognise the spike protein as foreign and begin building an immune response against it,” the Australian Health Department noted.

In the statement, Moderna said it would continue to follow participants for two years and collect additional data including “longer-term safety follow-up, duration of protection against COVID-19, and efficacy against asymptomatic SARS-CoV-2 infection.”

Australia has now passed the threshold of 70 percent of eligible adults who have received their first vaccine dose, according to the health minister. The country’s pathway to reopening includes achieving 70-80 percent full vaccination in order to open up and remove restrictions on liberties.

As of Friday afternoon, 50.6 percent of the population over 16 have received two doses of a COVID-19 vaccine, while 81.2 percent have received their first dose, according to 7News.