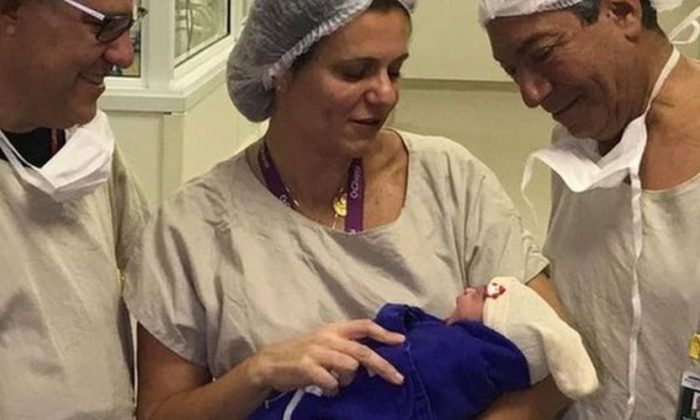 Brazilian doctors said the first baby has been born to a woman with a uterus that was transplanted from a deceased donor, reports say. (Reuters video)
International

Brazilian doctors said the first baby has been born to a woman with a uterus that was transplanted from a deceased donor, reports say.

Eleven previous births have used a transplanted uterus, but they were from a living—not a deceased—woman, who was usually a relative or a friend, according to The Associated Press.

Ten prior attempts using deceased donors in the United States, the Czech Republic, and Turkey haven’t worked, the report noted.

The girl was delivered in December 2017 by a woman who was born without a womb due to a rare condition. The woman, 32, was initially scared of the procedure, said Dr. Dani Ejzenberg, who is the transplant team’s lead doctor at the University of Sao Paulo School of Medicine, as AP reported.

“This was the most important thing in her life,” he told AP. “Now she comes in to show us the baby and she is so happy.”

The woman became pregnant through in vitro fertilization seven months after the transplant. The donor was a 45-year-old woman who had three children and died of a stroke. https://t.co/Jg1NKjWJGg

The woman got pregnant via in vitro fertilization (IVF) about seven months after the transplant procedure. The donor was a 45-year-old woman who died of a stroke.

Doctors say the unidentified woman gave birth via a cesarean section. A year later, doctors say the mother and child are healthy.

“The first uterus transplants from live donors were a medical milestone, creating the possibility of childbirth for many infertile women with access to suitable donors and the needed medical facilities,” Ejzenberg told the BBC. “However, the need for a live donor is a major limitation as donors are rare, typically being willing and eligible family members or close friends.”

Dr. Srdjan Saso of Imperial College London told the broadcaster that the results were “extremely exciting.”

Doctors from the Cleveland Clinic transplanted a uterus from a deceased donor in 2016, but the procedure failed.

“The Brazilian group has proven that using deceased donors is a viable option,” said the Cleveland Clinic’s Dr. Tommaso Falcone, AP reported. “It may give us a bigger supply of organs than we thought were possible.”