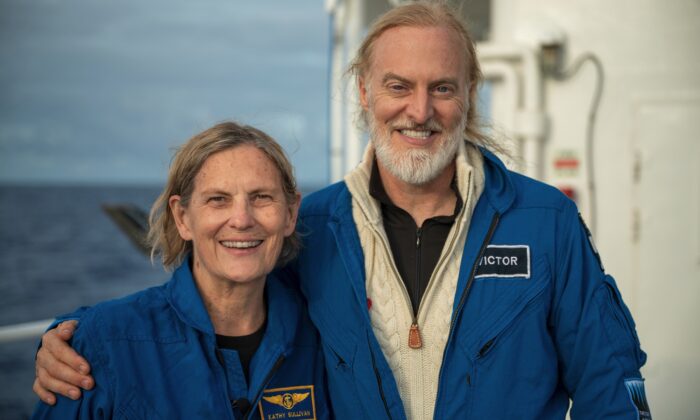 Former NASA astronaut and oceanographer Kathy Sullivan, who was the first American woman to walk in space, reached another milestone on June 7 by becoming the first woman to reach the lowest point on Earth.

Sullivan, 68, reached the deepest known spot in the ocean—known as the “Challenger Deep”—inside the Pacific Ocean’s Mariana Trench, after completing a 35,810-foot dive on June 7, according to EYOS Expeditions, which coordinated the mission’s logistics.

What a way to kick off #WorldOceansDay Dr. Kathy Sullivan becomes 1st woman to Challenger Deep & then connects to the @Space_Station Private companies leading the way in next generation of exploration @SpaceX @tritonsubs @CaladanOceanic https://t.co/U4NMc8iLa1
Photo:E. Alvarez pic.twitter.com/7nhqtUBKoY

The geologist and oceanographer, who became the first American woman to walk in space in 1984, was the eighth person to reach the spot in a submersible named the Limiting Factor (LF).

The low point of the Mariana Trench, a great canyon below the Pacific, was reached by U.S. Navy Lt. Don Walsh and the late Swiss oceanographer Jacques Piccard in 1960. They spent 20 minutes there in the submersible craft Trieste.

In 2012, “Titanic,” “Avatar,” and “Aliens,” film director James Cameron became the first person to make a solo dive to the spot.

Sullivan and Victor L. Vescovo, a 54-year-old explorer and retired U.S. Navy officer funding the mission, remained at the Challenger Deep for about 90 minutes, capturing images of the trench from the LF some 200 miles southwest of Guam, before beginning their four-hour journey back to the surface.

The deep-sea research submersible, which was designed by Florida-based company Triton Submarines, is the first-ever vehicle to have repeatedly reached the Challenger Deep.

“As a hybrid oceanographer and astronaut this was an extraordinary day, a once-in-a-lifetime day, seeing the moonscape of the Challenger Deep and then comparing notes with my colleagues on the ISS about our remarkable reusable inner-space outer-spacecraft,” Sullivan said in a statement released June 8.

Just back up from Challenger Deep! My co-pilot was Dr. Kathy Sullivan – now the first woman to the bottom of the ocean and a former astronaut as well as NOAA Administrator! Big congratulations to her! This was my 3rd time to the bottom. Well done by the crew, Triton, and EYOS.

“Just back up from Challenger Deep! My co-pilot was Dr. Kathy Sullivan—now the first woman to the bottom of the ocean and a former astronaut as well as NOAA administrator! Big congratulations to her!” Vescovo wrote on Twitter early June 7. “This was my third time to the bottom. Well done by the crew, Triton, and EYOS.”

The team completed its dive on June 7, and is expected to return to the island of Guam on June 15.

EYOS Expeditions founder Rob McCallum described the spot as “the most exclusive destination on Earth.”

“More people have been to the moon than to the bottom of the ocean,” he said.

“As we glided along the ocean floor, it reminded me of video clips from astronauts flying over the lunar surface,” Sullivan told The Times of London. “‘Moonscape’ was the word that kept coming back to me—like I was seeing the moon right here on our own planet.”

“If you’re looking for that absolutely glorious picture postcard view, space wins it every time. But if you want to be dazzled beyond anything you can imagine about the variety and abundance of life on Earth, go into the sea,” she continued.

She added that she hopes future generations will be compelled to appreciate the “mystery of the ocean.”

“I hope that spark is ignited within them of intrigue and curiosity, about the ingenuity of engineering, of science, of the mystery of the ocean … and that it would inspire another young Kathy Sullivan, who as a teenager interested in the ocean would never have imagined being the first woman to reach the bottom of it.”