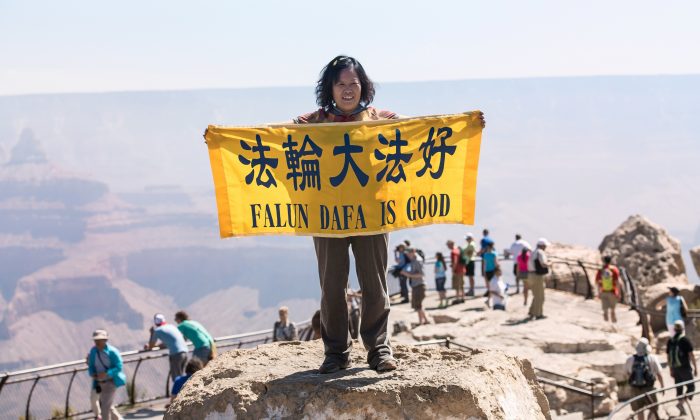 Cat Rooney
Cat Rooney is a photographer based in the Midwest. She has been telling stories through digital images as a food, stock, and assignment photojournalist for Epoch Times since 2006. Her experience as a food photographer had a natural expansion into recipe developer in 2012, thus her Twitter handle @RecipeGirl007.
View profile
Follow
biggersmaller
Print

GRAND CANYON, Ariz.–Falun Dafa practitioners set up a display this month hoping to tell Chinese and other tourists about a situation they said the Chinese communist regime is concealing.

“We are trying to raise awareness because the Chinese don’t get any truth inside their country because their media is all propaganda, propagandized,” said Mel Etherton, one of the display’s organizers. Banners at the canyon said “Falun Gong is Good” and “Stop the Killing of Falun Gong for Organs.”

The group chose the canyon for its fame. “The Grand Canyon is a popular destination for Chinese tourists,” said Fen Ho, an Arizona Falun Gong practitioner. In China, students are taught about “the Seven Natural Wonders of the World, and the Grand Canyon is one of them.”

“It is very important that they know what is going on inside their own country and the crimes that are being committed, so that they can then change their heart and maybe do something about it,” Etherton said.

“In particular, we wanted to raise awareness not only to the Chinese but to Americans and persons from around the world about the organ harvesting of Falun Gong practitioners that is going on [as part of the persecution in China], one of the worst crimes that is happening on our planet today.” According to the Falun Dafa Information Center website, “Falun Gong is a traditional Chinese spiritual discipline that is Buddhist in nature.

Etherton got a First Amendment permit to have the display. All National Parks set aside areas for people to exercise their First Amendment rights of freedom of speech, press, religion, and assembly. The display coincided with June 4, the 25th anniversary of the Tiananmen Square massacre in Beijing. That event is censored in China.

She said she felt that the awareness efforts were very successful. “We’ve really touched a lot of people, a lot of people have stopped and asked questions, and were surprised and didn’t know this was going on. Many people even thanked us for coming. I feel we’ve been pretty effective for our first try here at the canyon.”