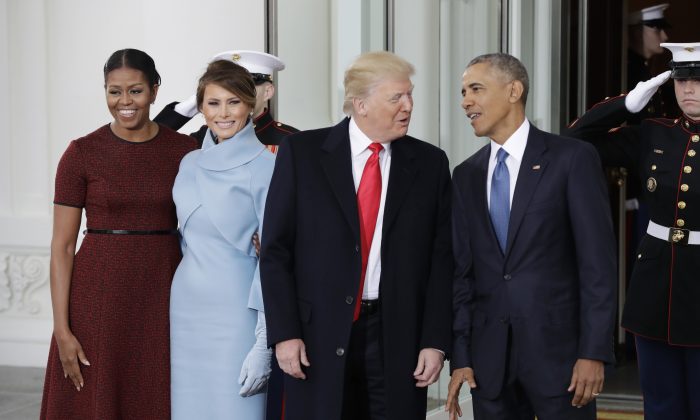 Coverage of President Donald Trump’s nascent administration was unabashedly negative, a new study can reveal. When compared with a study eight years ago during Barack Obama’s first 100 days in office, the difference between the two men is even starker than one might glean from a cursory glance.

In the “Big Three” news networks—ABC, NBC, and CBS—Trump and his administration received heavily negative coverage, according to the Media Research Center (MRC), which evaluated evening newscasts.

Trump’s status as a multi-decade celebrity and his bellicose campaign rhetoric naturally makes for great television; there’s a spectacle and intrigue around the new administration and what he might do next.

In the study, their evening newscasts dedicated 54 percent of their total news coverage, or 16 hours, to Trump during his first 30 days in office. Of that, there were 674 negative statements about Trump, while a mere 88 statements were deemed positive.

“Our measure of media tone excludes soundbites from identified partisans, focusing instead on tallying the evaluative statements made by reporters and the non-partisan talking heads (experts and average citizens) included in their stories,” MRC, which leans conservative, said of its study. “In their coverage of Trump’s first month, the networks crowded their stories with quotes from citizens angry about many of his policies, while providing relatively little airtime to Trump supporters.”

Journalists and even the anchors on these programs added their particular “anti-Trump editorial tone into the coverage.”

Meanwhile, about an hour of coverage, of the 16 hours of evening newscasts, was dedicated to anti-Trump protests. Nearly a fifth, or 82 out of 442, Trump stories or briefs during the 30 days included a discussion of an anti-Trump protest, MRC said.

Early on, Obama Had It Easy

Now, compare that with former President Barack Obama’s first 100 days in office, and with his predecessors, George W. Bush and Bill Clinton.

“Roughly four out of 10 stories, editorials and op-ed columns about Obama have been clearly positive in tone, compared with 22 percent for Bush and 27 percent for Clinton in the same mix of seven national media outlets during the same first two months in office,” Pew said in 2009. Only 20 percent of stories on Obama were negative, while some 38 percent were neutral or mixed, Pew said.

In the editorial sections of newspapers, then President Clinton got more favorable coverage, but received tougher treatment in regular news stories, Pew found. For Bush, news coverage was more favorable but opinion pieces were more negative. But Obama got more relatively positive treatment in the news and in op-eds.

The type of news coverage in Obama’s first 100 days focused chiefly on his personal and leadership qualities—rather than on his policies. These are the types of stories that use generalities and anecdotes to put him in a positive light.

Thirty-one percent of all Obama stories at the time focused on his relationship and meetings with the American public, which was far more than Bush (8 percent) and Clinton (16 percent).  “This focus on the public has also been a factor in the positive tone of the coverage, both because it plays to one of Obama’s political strengths and because the citizen voices have often been so favorable,” Pew added.

The media’s coverage of Bush focused far more on his legislative agenda and his dealings with Congress.

“Those who see the press as ideologically motivated toward liberals will likely see that phenomenon as a factor here as well,” Pew said in the study.

Newspapers and evening network television were the most positive in how they reported on Obama.