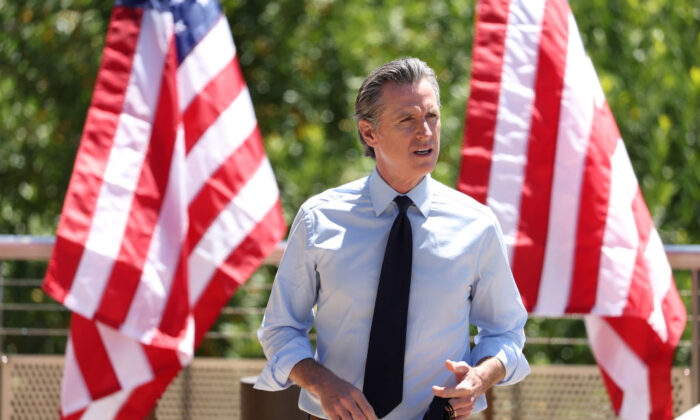 Thirty companies that conduct business with the state of California have contributed $1.6 million to Gov. Gavin Newsom’s gubernatorial campaigns while receiving more than $5 billion in contracts with the state government, according to a nonprofit watchdog.

The 30 firms—including Big Tech giants, some of the best-known banks in the United States, a select group of public utilities, and five health care titans—are the biggest winners among the more than 201,000 vendors that in 2021 received a total of $87.2 billion in payments from the state government headed by Newsom since 2019.

Newsom was seen at the White House on July 13, an appearance that prompted speculation among political observers that he could be preparing to challenge President Joe Biden for the 2024 Democratic presidential nomination. Biden was in Israel at the time.

That month, Newsom ran an ad in Florida criticizing Gov. Ron DeSantis, who is widely thought to be the most likely Republican presidential nominee if former President Donald Trump isn’t the candidate.

The data made public on Aug. 31 by OpenTheBooks.com (OTB), the Illinois-based nonprofit that in 2021 filed more than 47,000 Freedom of Information/public records requests at all levels of government across the country, is likely to prompt a flood of questions about Newsom’s political ethics and administration.

Getting the California state government’s spending data required OTB to file repeated California Public Records Act (CPRA) requests, all of which were denied by two state controllers, beginning in 2015.

Then, after a California judge upheld the claims of current Controller Betty Yee and her predecessor, John Chiang, that compiling the data in the state’s “checkbook” would be an “undue burden” because the state lacks a central payment database, OTB filed CPRA requests with 461 individual state agencies.

All but 27 of the agencies responded, which enabled the nonprofit to publish on its website the 50th state government “checkbook,” along with most federal spending since 2001 and the spending of more than 15,000 municipal governments across the country.

The biggest winner among the 30 firms is Anthem Blue Cross, which contributed a total of $69,305 to Newsom’s campaigns for governor and received just short of $845 million in payments from the state. That represents more than $12,000 in state payments for each $1 in campaign contributions. Anthem Blue Cross is based in Indianapolis.

Second on the list is another health industry giant, United Health Group, which made $120,900 in Newsom campaign contributions and received nearly $545 million in state payments. United Health Group is based in Minnetonka, Minnesota.

Third, with $13,026 in Newsom contributions, was Bank of America, which was the recipient of nearly $509 million in state money. Bank of America’s central corporate office is in Charlotte, North Carolina.

The fourth firm among the top 30 is Granite Construction Co. Watsonville, California-based Granite sent $15,000 in campaign contributions to Newsom and received more than $393 million from the state government.

Fifth is Pacific Gas & Electric, the San Francisco-based public utility that contributed almost $124,000 to Newsom’s campaigns and was the recipient in 2021 of nearly $324 million in payments from the state of California.

The largest individual company campaign contribution total among the top 30 was the $242,550 given by Centene and its affiliate health care and insurance networks. Centene, which is based in St. Louis, received more than $206 million from the state. New York-based Citigroup contributed $171,250 to Newsom campaigns and received $264.7 million from California.

During a telephone news conference, OTB’s founder and chairman, Adam Andrzejewski, told reporters that based on California contribution records, there were “979 entities who last year received $6.2 billion in state payments and they have given the governor almost $10.6 million in campaign donations.”

He said Newsom has also received millions of dollars in contributions from the state’s richest and most prominent business and political players.

“You’ve got five family dynasties—the Pritzkers, the Gettys, three others, including the George Soros family. These five gave $1.353 million to Newsom,” Andrzejewski said.

“At the local level in California, you’ve got what’s called a ‘pay-to-play’ prohibition, but it doesn’t apply to the governor. If you’ve got business before a municipality, you can’t give in the local races.”

Andrzejewski said OTB will again file a CPRA request for all state spending data with the new state controller who will be elected in November.

“Whoever is elected, they will have to make a decision,” he said.

“We’ve done what Governor Newsom, Controller Yee, the attorney general, a superior court judge, and countless bureaucrats have refused to do. Lawmakers in Sacramento have a duty to make sure the problem ends now.”

A spokesman for Newsom didn’t respond to The Epoch Times’ request for comment.