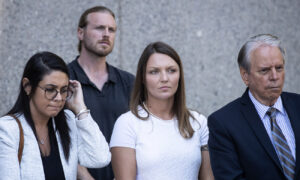 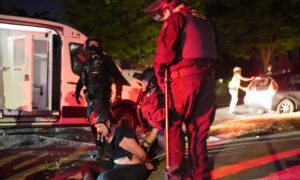 Portland Rioters Hurl Chunks of Concrete at Police During Clashes
0 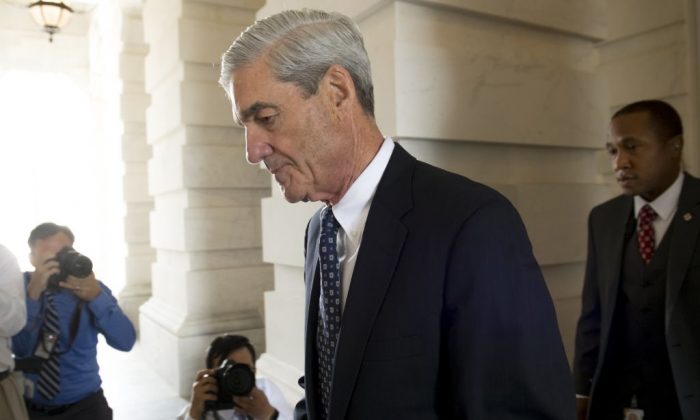 Former FBI Director Robert Mueller, special counsel on the Russian investigation, leaves following a meeting with members of the Senate Judiciary Committee at the Capitol in Washington on June 21, 2017. (SAUL LOEB/AFP/Getty Images)
Crime and Incidents

Special counsel Robert Mueller fired an FBI agent from his team investigating Russian interference in the presidential elections, after the agent was found sending pro-Clinton and anti-Trump text messages to his mistress.

The recently released news of the firing (which occurred months ago) has brought attention to the FBI agent, Peter Strzok, as well as the several key investigations of which Strzok was a part, and the possibility that Strzok’s political interests compromised the credibility of the investigations.

During the presidential elections, Strzok was involved in the investigation into Hillary Clinton’s unsecured email server and her receipt of classified documents through that server. According to The Hill, Strzok allegedly edited a key phrase in the FBI’s conclusion on the case when former FBI Director James Comey gave his statement on the FBI’s decision.

The significance of the change of phrasing was noted by Sen. Chuck Grassley (R-Iowa) on Nov. 6. According to a release from Grassley, “The statute governing the mishandling of classified material establishes criminal penalties for ‘gross negligence.'”

Grassley notes that Comey’s draft from May 2, 2016, “stated that Clinton had been grossly negligent in handling classified information,” yet when Comey gave his remarks on June 10, 2016, the FBI had “deleted that legal language, and instead refers to Clinton and her associates as ‘extremely careless,'” Grassley said.

Strzok’s involvement in possibly altering the outcome of the investigations goes deeper.

NEW: Embattled FBI supervisor Peter Strzok also conducted the interviews with Huma Abedin and Cheryl Mills, in which they falsely claimed they didn't know about Hillary's email server when she was Secretary of State. https://t.co/EZ8B1rG6oq @dailycaller

Critics say Strzok’s partisanship is evident in the different treatment given by the FBI to Michael Flynn, Trump’s former national security adviser.

When Strzok and another FBI agent interviewed Flynn, Flynn also made false statements. But unlike Abedin and Mills, Flynn, after being charged by Mueller’s special counsel, pleaded guilty to making false statements.

When Flynn accepted the meeting with Strzok that would lead to him lying to the FBI, Flynn apparently did not know ahead of time that he would be interviewed, and so didn’t have a lawyer present.

An unnamed source told The Sean Hannity Show, “It wasn’t until after they were already in [Flynn’s] office that he realized he was being formally interviewed. He didn’t have an attorney with him.”

Questions are also being raised concerning Strzok’s role in starting an FBI probe into possible collusion between the Trump campaign and Russia to interfere with the election. According to The New York Times, Strzok was removed from the Clinton investigation and appointed to lead the collusion investigation in July 2016.

At issue is whether the infamous Fusion GPS dossier containing claims that Trump had colluded with Russia played a role in starting this investigation. The FBI has admitted it has not been able to verify the contents of the dossier.

The dossier was paid for by the Clinton campaign and the Democratic National Committee and was compiled by ex-British spy Christopher Steele. There are differing accounts of when the claims made in the dossier reached the FBI.

Court documents in the UK, where Steele is being sued by a businessman mentioned in the documents, show that Steele provided a representative of Sen. John McCain (R-Ariz.), Mr. Kramer, with “pre-election memoranda.” McCain admitted in a statement on Jan. 11 that he had subsequently “delivered the information to the director of the FBI.” It is unclear at what point in time this happened.

The first installment of Steele’s dossier was dated June 20, 2016, which means it preceded the FBI opening its investigation.

A senior U.S. official familiar with Steele told Mother Jones that he allegedly contacted the FBI in early July.

“He regularly consults with U.S. government agencies on Russian matters, and near the start of July on his own initiative—without the permission of the US company that hired him—he sent a report he had written for that firm to a contact at the FBI, according to the former intelligence officer and his American associates, who asked not to be identified,” Mother Jones reported on Oct. 31, 2016.

According to the publication, the FBI requested “all the information in his possession” in August.

The FBI has not been forthcoming about some of the details of the Russia investigation. House Republicans are now preparing contempt charges against the FBI and Department of Justice, and, according to the Washington Examiner, some of the charges are related to the FBI withholding key information about its investigation into Russian meddling.

Fox News reported on Dec. 3 that the Justice Department’s Office of Inspector General is reviewing Strzok’s role in the Clinton investigations and other sensitive cases.

Strzok’s possible partisanship in exercising his responsibilities in the FBI occurs within a context of other officials who may be acting out of questionable motives.

Strzok’s mistress, to whom he sent the anti-Trump and pro-Clinton texts that led to his transfer to the FBI’s human resources department, is allegedly FBI lawyer Lisa Page, who was also a member of Mueller’s special counsel team.

According to The Washington Post, Page formerly worked for Acting FBI Director Andrew McCabe, who was pressured to step down for allegedly politicizing the agency and having conflicts of interest.

The alleged partisanship of Strzok may be just the tip of the iceberg. As Congressional and Department of Justice investigations proceed on the issues of Clinton’s email server, the Uranium One scandal (the sale of 20 percent of U.S. uranium holdings to Russia, while Clinton was secretary of state), the improper use of electronic eavesdropping by the Obama administration on members of the Trump campaign, and the probe into the Trump campaign’s possible collusion with Russia, more news may break about U.S. officials acting improperly or even criminally in their opposition to Trump.