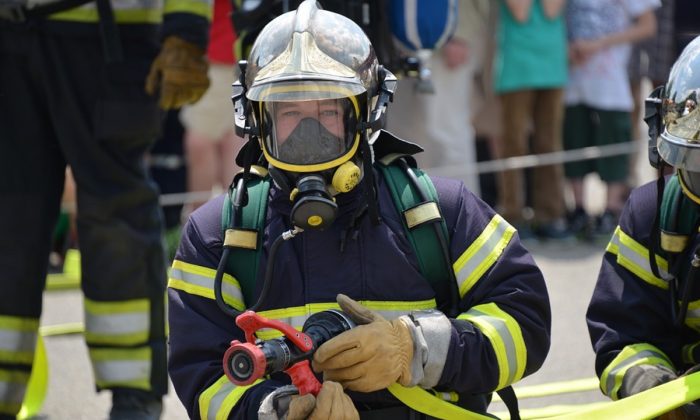 Stock image of a firefighter. (Blickpixel/Pixabay)
Crime and Incidents

Firefighters Try to Cope as Teammate Dies of Overdose

Firefighters are not used to receiving a 911 call about one of their members—but on May 19 Jaffrey Fire Department had to cope up with an emergency situation involving one from their own team.

Firefighter Cara Campbell, one of the only two women firefighters on the team, died on Sunday, May 19, due to accidental overdose, reported WMUR.

Fire Chief David Chamberlain didn’t expect that he would have to respond to an emergency call about one from his own department.

“I arrived not too long after that and was notified by my assistant chief that it was one of our members, Cara Campbell,” Chamberlain told WMUR.

Campbell wasn’t breathing when she was taken to hospital and died on Sunday morning at 10:35.

Chamberlain said she liked serving and helping people in the community.

“She was a good person. She had a purpose. She touched a lot of people’s lives,” Chamberlain said. “And I don’t think she knew that, but I think she saw it the other day when she was welcomed home, and she will see it on Friday and Saturday when we have her services.”

He said the deceased fire fighter’s mother wants others to learn a lesson from the circumstances in which she died.

“No one knows the true story about what went on in the apartment other than Cara and the people that were there, but I think she wouldn’t want us to dwell on it,” Chamberlain said. “She would want us to continue and support each other.”

“The nation’s opioid crisis is fueling the Council’s grim probabilities, and that crisis is worsening with an influx of illicit fentanyl,” the NSC said in a statement on Jan. 14.

The recent report comes at a time where public health officials and law enforcement are highlighting the risks of the opioid epidemic that is plaguing Americans. In the most recent example, a mass drug overdose at a home in California killed one and hospitalized a dozen more. Authorities said the overdoses were likely to have been caused by fentanyl. Chico Police Chief Michael O’Brien added that they had been waiting for such an event to happen amid reports that the dangerous narcotic was heading west.

Fentanyl, a synthetic opioid pain reliever 50 to 100 times more potent than morphine, surpassed heroin to become the most common drug linked to an overdose death in 2016, according to the CDC (pdf). Two milligrams of fentanyl is a lethal dose for a non-opioid user.

Its discovery in the late 1970s as a powerful alleviator of chronic pain led to a dramatic increase in sales and prescriptions. The drug’s sales increased about 10-fold in the first year (1981) after the drug’s initial patent wore off, and in 2004, sales exceeded $2.4 billion in the United States, according to a study published in the Journal of Pain.

Back in October 2017, President Donald Trump declared the opioid crisis a national public health emergency. The Senate subsequently passed a bill that received bipartisan support to combat the crisis.

The law includes a number of initiatives to advance recovery and treatment, and to prevent drugs from getting into people’s hands in the first place. It also includes research into non-opioid alternatives for the treatment of pain.

“While there is still much work to be done, this historic effort will undoubtedly save lives and put families and communities across our country on the road to recovery,” Rep. Greg Walden (R-Ore.), a sponsor of the act, said at the time.