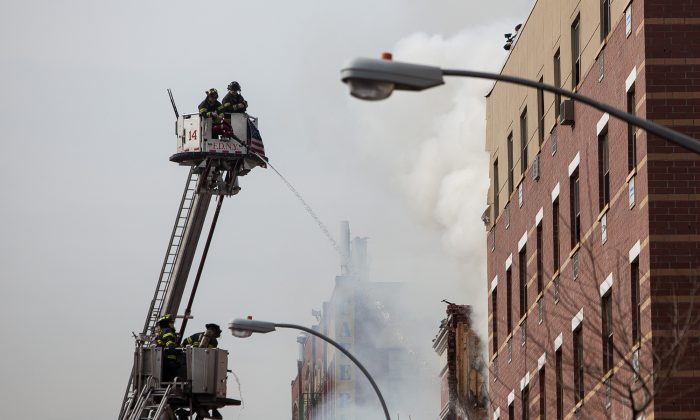 NEW YORK—Firefighters are now responding to all calls about gas leaks, according to an order in a report released Wednesday, and residents can already report leaks through 911.

The report was released by a working group appointed by Mayor Bill de Blasio in the aftermath of a powerful gas explosion in East Harlem in March.

Previously, all calls about gas leaks were directed to the 311 call center or to private utilities like Con Edison and the National Grid. The callers would only be transferred to 911 if the nature of the gas leak met certain criteria, like repeat reports or the presence of exposed wiring or flickering lights.

Now, all calls about gas leaks are immediately rerouted to 911.

Firefighters are already trained to respond to gas leaks. Upon arrival they disconnect leaky appliances, ventilate the building, and evacuate residents. The private utilities that service the gas pipelines are also notified.

The report also indicated that the city will mount a public education campaign to let New Yorkers know to call 911 if they smell gas.

The Fire Department has indicated that it has the capacity to handle all gas leak calls, the report states. The department’s average response time is 8 minutes compared to 20–25 when Con Edison responds.

Con Edison officials said they received only one call reporting gas at the East Harlem building on the morning of March 13, about 20 minutes before the explosion. Building residents said they made other complaints about the odor, but those calls could not be located by city investigators.

The fire department was never notified of the gas leak in the East Harlem building. Investigators believe a leaky pipe led to the explosion that leveled two buildings, killed 8 people, injured 70, and left scores homeless.

The gas pipe that led to the explosion was 127 years old, an age not unusual in the city, prompting de Blasio to warn of New York’s aging infrastructure.

De Blasio then ordered the creation of the Underground Infrastructure Working Group, composed of several city agencies including the departments of transportation, environmental protection, buildings, and fire, among others.

The report Wednesday includes a set of recommendations, addressing the problems of the city’s aging infrastructure, with a primary focus on improving safety. Some of the recommendations have already been adopted, while others are in the pilot stage.

Among the recommendations is an order, already adopted by the Department of Transportation (DOT), to notify private utilities whenever it reports a faulty street condition, like a cave-in or a depression.

Previously, DOT only contacted Con Edison or National Grid if the site of the street fault smelled of gas. As a result, the utilities did not have a chance to assess if the street condition was above risk-prone infrastructure and could not respond accordingly.

In addition, the Department of Environmental Protection (DEP) has launched a pilot project in which it coordinates with private utilities to repair piping at a set of 10 locations. The advantage is that DEP and the utilities would not have to excavate the street several times, instead getting all the work done while the pipes are exposed during a single excavation.

“If the city is doing sewer work or water work we want to go in there with them and hopefully do this in a fashion that could reduce costs,” Edward Fappiano, vice president of gas at Con Edison, said.