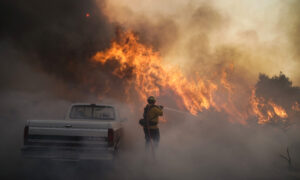 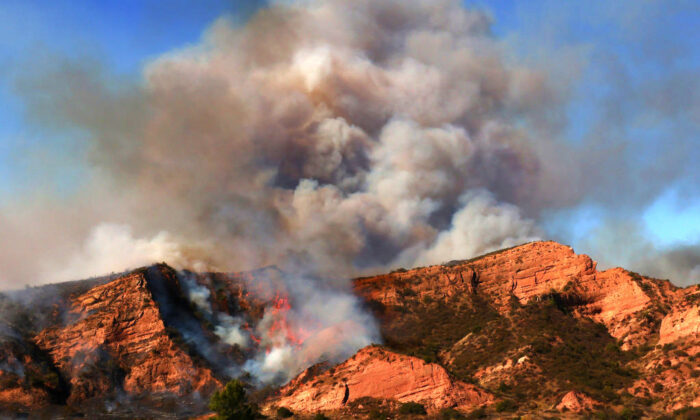 Firefighters have been successful in slowing down the forward spread of Orange County’s Bond Fire after air and ground units worked steadily throughout the day and night, extinguishing hot spots and mopping up around structures.

Firefighters and 11 helicopters—including the CH-47 Chinook helitanker that can drop 3,000 gallons of water in a single pass—continued to mop up hot spots and improve containment lines throughout the day, according to the OCFA, with 1,560 personnel engaged in the operation.

OCFA announced that all evacuation orders for the City of Lake Forest had been lifted on Dec. 4, but Modjeska, Silverado, and Williams canyons all remained under mandatory evacuation, along with certain areas of Foothill Ranch and Portola Hills west of El Toro Road and north of the 241 Freeway.

Additionally, all roads that were closed on Dec. 3 by fire authorities have been reopened—with the exception of Santiago Canyon Road, which remains closed between Jackson Ranch and the 241.

The Irvine Unified School District continued to hold distance-only learning on Dec. 4 because of the fire. While the fire posed no danger to Irvine schools, they were not able to utilize their HVAC (heating, ventilation, and air conditioning) systems, as required per COVID safety protocols, to improve the poor air quality resulting from the fire.

Saddleback Valley Unified School District canceled both hybrid and distance learning at Foothill Ranch Elementary and Portola Hills Elementary on Dec. 4 due to the fire. The district kept other schools open but moved classes to distance learning only—including Trabuco Canyon Elementary, which was fully closed on Dec. 3.

Jessica Novello, the public information officer for OC Animal Care in Tustin, said about 30 small animals had been impounded at the site because of the fire. The OCFA reported the animals as 17 cats, 10 dogs, one rabbit, and one guinea pig.

No one had returned to pick up their animals as of 10:30 a.m. on Dec. 4, Novello said. OC Animal Care announced Dec. 3 that it would allow people evacuating due to the fire to drop off their dogs, cats, and other small animals at the shelter for temporary care.

People that needed to evacuate larger animals were told they could bring them to the Orange County Fair & Events Center in Costa Mesa or Los Alamitos Racetrack. However, on Dec. 3 the racetrack filled to capacity, and large animal owners were directed to the Anaheim Equestrian Center instead.

Southern California Edison shut off electricity to 51,997 homes in seven counties on Dec. 3 to protect against fire danger due to the high winds. On the morning of Dec. 4, over 2,000 remained without power, including 859 in Orange County, but by 9 p.m. all power had been restored.

The blaze started shortly after 10 p.m. on Dec. 2 as a house fire on Bond Road in Modjeska Canyon, and began spreading in Silverado Canyon brush due to high Santa Ana wind conditions, as reported by the National Weather Service (NWS).

Prior to the fire starting, the region was placed under NWS Red Flag Warnings, which indicate critical fire weather due to high winds and low humidity. The warning was scheduled to remain in effect through the evening of Dec. 5.

Firefighters are not yet able to estimate when the fire will be fully contained.