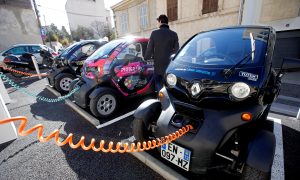 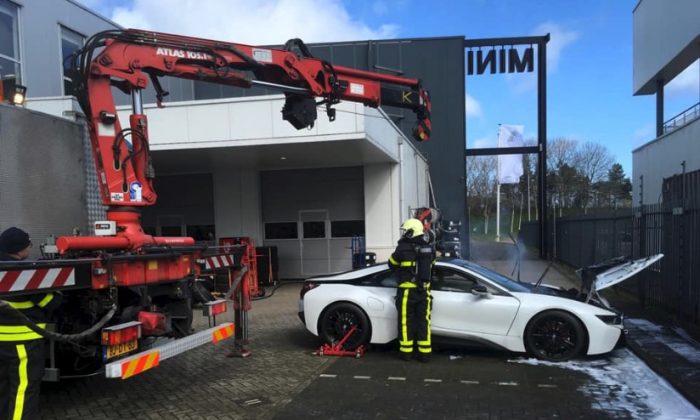 Fire crews in the Netherlands responded to a smoking BMW i8 plug-in hybrid by lifting the car with a crane and immersing the vehicle in a huge vat of liquid.

Firefighters from the Central and West Brabant Fire Brigade in the Dutch province of Brabant were summoned to a local showroom on March 25, following reports of the BMW with smoke coming out of it.

“This morning an electric car started to smoke in a showroom,” the fire department wrote on Facebook (translation from Dutch). “The employees of the garage and the fire brigade acted quickly to drive the car outside. Because it is an electric car, a creative response was necessary.”

Since lithium-ion battery fires have been known to require extraordinary response measures—including dousing with massive amounts of water—the Dutch fire department brought in a crane and a huge vat of water. They then dunked the smoking car.

“The car was immersed in a container of water because extinguishing it in the ‘normal’ way is difficult with these cars,” the fire department said in the statement.

“The car will remain in the vat of water for the next 24 hours,” they added.

Battery-powered vehicles are notoriously difficult to deal with when they catch fire.

A Tesla Model S crashed on a Florida motorway on a Sunday afternoon in February, and a day later crews were still struggling with the car’s damaged lithium-ion battery pack, which kept reigniting.

“Battery fires can take up to 24 hours to extinguish. Consider allowing the battery to burn while protecting exposures,” Tesla says in its Emergency Response Guide. “Due to potential re-ignition, a Model S that has been involved in a submersion, fire, or a collision that has compromised the high voltage battery should be stored in an open area at least 50 ft (15 m) from any exposure.”

In addition to letting the battery burn itself out fully over time, Tesla also advises that “a thermal imaging camera can be used to actively measure the temperature of the high voltage battery and monitor the trend of heating or cooling” even after the fire appears to have gone out.

Safety experts cited by Bloomberg say putting out a lithium-ion battery fire requires much more water than what it takes to stop a fire in a typical gasoline engine.

“It’s such a difficult fire because it takes so much water to put out,” said Robert Taylor, fire marshal in Davie, Fla., where the Tesla Model S crash occurred on Feb 24.

Following the Ft. Lauderdale incident, the National Transportation Safety Board announced an investigation.

“NTSB has a long history of investigating emerging transportation technologies, such as lithium ion battery fires in commercial aviation, as well as a fire involving the lithium ion battery in a Chevrolet Volt in collaboration with the National Highway Traffic Safety Administration,” said NTSB Chairman Robert S. Sumwalt. “The goal of these investigations is to understand the impact of these emerging transportation technologies when they are part of a transportation accident.”

“Los Angeles County firefighters wearing self-contained breathing apparatus responded to the fire and applied both water and foam. The flames were quickly extinguished, but smoke continued to come from the vehicle,” the NTSB wrote in a statement.

“Firefighters removed portions of the vehicle’s left front fender and under-hood trim, severed the high voltage cut loop, and applied additional water and foam under the hood and behind the front wheels. The fire captain estimated that less than 300 gallons of water and foam were applied during the event.”